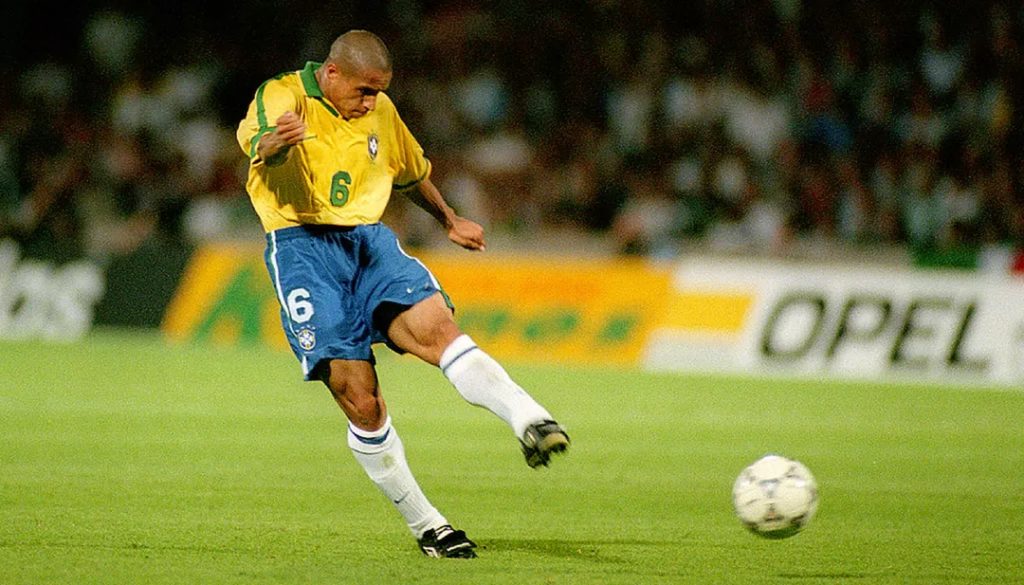 ROBERTO CARLOS scored on his Sunday League debut as the legendary Brazil and Real Madrid left-back turned out for pub side Bull in the Barne United.

Shrewsbury Sunday League side Bull in the Barne United, named after a local pub, were lucky enough to have the 48-year-old World Cup winner make an appearance for them after winning a charity ‘Dream Transfer’ raffle on eBay in January.

Despite his sterling credentials, Carlos was only deemed fit enough for a place on the bench for Friday’s clash with Harlescott Rangers.

But he came on to play his part in a seven-goal thriller at the Hanwood Village Hall Recreation Centre.

Roberto Carlos has won the World Cup, Copa América and the Champions League…

Well remembered for his wand of a left foot that produced the jaw-dropping ‘banana kick’ goal against France in 1997, Carlos couldn’t quite reproduce that level of magic.

But after entering the fray with his side 2-0 down, the star was presented with the chance to score from the spot after a team-mate was fouled.

And sure enough Carlos found the bottom corner from 12 yards for Bull in the Barne United to ensure he went down in folklore at the club.

Unfortunately his goal wasn’t enough to prevent a 4-3 defeat.

Carlos’ professional playing career, which included over 100 caps and winning the 2002 World Cup with Brazil and 11 seasons and three Champions League triumphs with Real Madrid, most recently saw him have a spell in India with Delhi Dynamos in 2015.

“I’ve heard that the team’s been down a number of players this season, so here’s hoping my training is enough to help them up their game and bring what Bull in the Barne’s fans want to see!”

Bull in the Barne manager and goalkeeper Ed Speller said: “Roberto Carlos is one of those legends who’s inspired so many young players’ love of the game.

“My jaw absolutely dropped when we found out Bull in the Barne won the Dream Transfer and he’ll be playing alongside the team in Shrewsbury.”