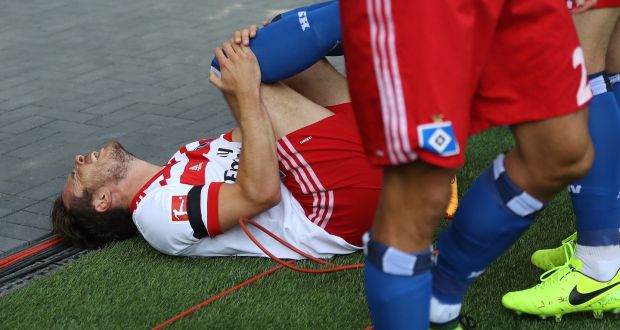 According to reports from Football London, West Ham have been cleared to open talks with Hamburg winger Nicolai Muller over a summer transfer.

The 30-year-old was linked with a move to West Ham last summer, and it seems the Hammers will reignite their interest in the winger again.

The player dislocated his knee completely while celebrating his goal against Augsburg in August, and has been missing from action for the past seven months.

Hamburg are second from bottom in the German top flight, and are facing the prospect of relegation for the first time in their history.

Moreover, the club is in crisis financially, crippled with debts, meaning they cannot afford to offer a new deal for Muller.

The player is unwilling to risk making a premature return which could be seen as a massive boost for the Irons. Bundesliga giants Schalke are also interested but David Moyes’ side hold an advantage as they can enter pre-contract talks due to being a foreign club.

West Ham are also fighting for survival and are just three points above the Premier League drop zone. There will be no European football next season at the London Stadium which gives Schalke an advantage in signing the player.

The Hammers’ best and only chance of signing the player is likely to depend on whether they survive the season. In any case, they need to move quickly now.