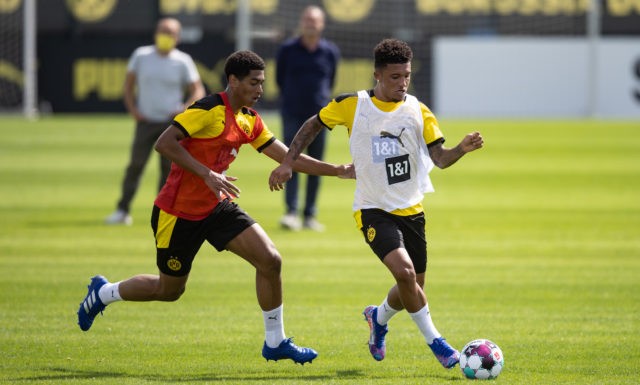 Manchester United are closing in on securing a deal for Borussia Dortmund’s Jadon Sancho.

According to reports from The Mirror, Sancho is close to completing a move to United.

The highly-rated England international is set for a significant increase in wages. He will sign a long-term deal at Old Trafford.

The Report claims that Sancho, who scored 17 goals and provided 16 assists last season for Dortmund, is excited by the prospect of a move to Old Trafford.

United have made a breakthrough in terms of negotiating a deal where they would pay around £70million upfront. The total cost of the deal would be around £105million, and it would easily eclipse the British record fee if further add-ons are added.

Sancho is close to agreeing personal terms with United. The 20-year-old will wear the iconic #7 shirt.

At United, Sancho will treble his current 75k-per-week contract. He will sign a four-year deal worth between £200k-£220k-a-week.

The deal will also include the option for Manchester United to extend by one more year.

Alexis Sanchez, who currently holds the #7 shirt, is set to join Inter Milan on a free transfer.

United will be freed of his £400,000-a-week wages. As a result, they are expected to save around £38m, which they are likely to reinvest on Sancho.

The likes of David Beckham, George Best, Eric Cantona, Michael Owen, and Cristiano Ronaldo have donned the #7 shirt, and it remains to be seen whether Sancho becomes the next big star to glorify the iconic jersey.