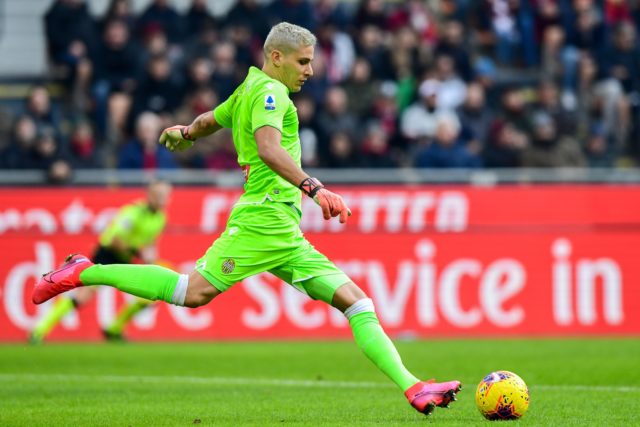 According to reports from Italian publication Tuttomercatoweb, a trio of Premier League clubs are showing keen interest in signing Hellas Verona’s goalkeeper Marco Silvestri, in the summer transfer window.

The 29-year-old goalkeeper has played in England before, with Leeds United from 2014 to 2017, during the chaotic Massimo Cellino era.

After making 98 appearances in three seasons with Leeds, he was sold to Hellas Verona in 2018.

He has been a key player for Verona this season, making 25 appearances for the club. He has established himself as a regular first-team member and has helped the side climb to eighth in the Serie A table.

Everton boss Carlo Ancelotti will be looking to bolster his squad in the summer, but it remains to be seen whether he would be willing to add another goalkeeper to his ranks.

Jordan Pickford is the first-choice keeper at the club, and Everton need a strong goalkeeper to challenge him for the spot. Also, the chance to work with Ancelotti could appeal to Silvestri.

Southampton have Alex McCarthy and Angus Gunn as two very good goalkeepers and it remains to be seen whether they would be keen to add another player in that position when serious attention is required elsewhere.

The report also adds that Norwich City are also interested in signing the player. However, the chances of him moving to the Canaries will largely depend on where they finish at the end of the season, as Norwich are in danger of getting relegated to the Championship.