Raphael Varane: A world-class defender in the making

When Real Madrid face Borussia Dortmund in their Champions League semifinal first leg clash on Wednesday at the Bernabeu, an array of world-class, household names will be on display. Amid this talent, will be a 19-year-old centre-back by the name of Raphael Varane, who looks set to become a footballing phenomenon over the next decade. 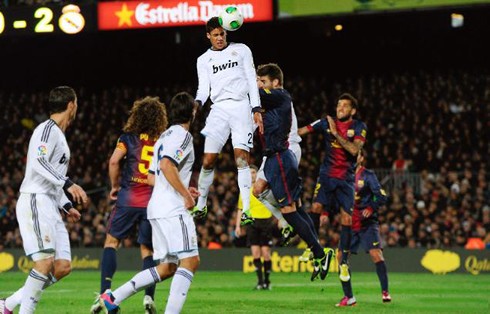 The Frenchman signed for Madrid from Ligue 1 club RC Lens in the summer of 2011 aged 18, for a fee in the region of €10 million. He made his debut early in the 2011/12 season, and scored in his second appearance with an outrageous back-heel against Rayo Vallecano. In the process he became the youngest ever foreigner to score for Los Blancos.

This season has been the year Varane’s game has gone up a gear, and he has now ousted the highly-rated Pepe as first-choice alongside Sergio Ramos at the heart of the Madrid defence.

He made a memorable El Clasico debut in January, scoring a vital equaliser and making numerous remarkable clearances from Barcelona attacks, in their first leg Copa del Rey showdown. He was rightfully voted Man of the Match. In the return fixture he was equally influential, scoring another header to stun the Camp Nou.

Bixente Lizarazu, the World Cup-winning legend of French football spoke glowingly of Varane after his displays against Barcelona, and also Manchester United in the Champions League.

“We are talking about a kid at Real Madrid who has unseated Pepe, who is still a great centre-half.

“His performance against Manchester United and Barcelona was extraordinary.”

If ever Varane’s talent and huge potential needing summing up it would be that in March, Spanish newspaper Marca included him in Real Madrid’s all-time foreign XI, which also contained players such as Zinedine Zidane, Cristano Ronaldo, Ronaldo, Luis Figo and Michael Laudrup.

There really is something special about the teenager. He as an intimidating physical presence (6’3), is quick, powerful, excellent on the ball and scores goals. Many are convinced he will be the world’s best defender within a few years, with others claiming he could become as good as Paolo Maldini eventually. That is some compliment.

He made his debut for France in March in a World Cup qualifier against Georgia, and is part of an exciting new generation of young French defenders, including Mapout Yanga-Mbiwa and Mamadou Sakho. He has two caps to his name, but expect that number to increase rapidly. He has the look of a future captain of his country about him.

The semifinal battle against Dortmund will be full of quality. Varane’s job will be to keep the Bundesliga side’s in-form striker Lewandowski quiet. The Polish international has scored in 12 league games in a row and is one of Europe’s outstanding strikers on current form.

With the football world watching it will be a big test for Varane, who at the end of the day is still very inexperienced. This will arguably be the biggest game of his career to date, in terms of importance and what’s at stake for both sides.

So far this season he has proven he is not fazed by playing in the big games, and actually seems to play better in them. That is the sign of a great player. When people talk about the young players in world football to watch in the coming years, the same names pop up: Neymar, Isco, Mario Gotze, Lucas Moura.

For all of their undoubted potential and creative brilliance, Raphael Varane could be the real one to watch.