Rangers will be without a number of key players for their trip to New Douglas Park for their Saturday lunchtime kick-off with Hamilton.

The SPL Champions will be without strikers Kris Boyd and Kenny Miller with Boyd being ruled out for up to 4 weeks with a hernia and Miller is suspended after his red-card against Dundee United. Boyd was taken off at half-time in the 3-3 draw on Sunday and will be a huge miss for Rangers. 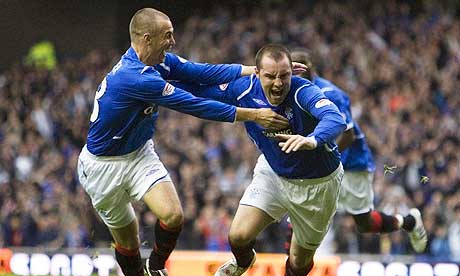 Miller and Boyd, both so influential will be out for Rangers

To add to the problems, Walter Smith will be without another 2 forward players as Steven Naismith and John Fleck are both injured and ill respectivley. Nacho Novo could make a return to action but he is still a doubt after picking up a bad thigh injury in the Old Firm match on January 3rd.

The lack of options for Rangers could be a problem, but this surely paves the way for the much-criticised Kyle Lafferty to have a run as a striker. The £4m Northern Irish international has been subject to some harsh criticism by supporters and journalists but to be fair, has done nothing to justify the transfer fee Rangers forked out last July. US international winger DaMarcus Beasley will also be ruled out of this one with a calf injury, but should be back for the home match against Hearts.

Six attacking players out, but thats not it.

Central midfielder Lee McCulloch is suspended for the trip to Hamilton on Saturday and is expected to be replaced by Maurice Edu, who should make his first start since returning to first team action. McCulloch joins Pedro Mendes, who is still out with an injury that he picked up against Unirea Urziceni back in October.

Steven Davis was also taken off at half-time and is a doubt for Saturday’s game, but he only sustained a dead leg which means he should recover in time for this one. French midfielder Jerome Rothen who has been missing since returning to Paris when he contracted Swine Flu will be unavaliable as expected.

Just to add on top of all these injuries, Madjid Bougherra is on African Nations Cup duty with Algeria.

So what are Rangers left with?

Allan McGregor is a certainty to start between the sticks. It is expected Walter Smith will go with the same backline of Kirk Broadfoot, Danny Wilson, David Weir and Sasa Papac against Billy Reid’s side.

Maurice Edu and Steven Davis set to partner in midfield

Midfield is a bit more of a guess, it is very likely Maurice Edu and Steven Davis will be in the centre, but if Davis doesn’t make it then it could be a chance for Jamie Ness to make his Rangers debut. The teenager has been on the bench for a while and if Davis wasn’t to make it then he could certainly get his chance.

Out on the flanks, Steven Whittaker will probably play on the right and I would hazard a guess that left-back Steven Smith would be asked to deputise there. 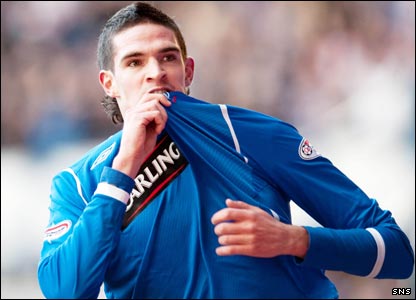 Kyle Lafferty could get his big chance in attack

Attack is the big problem area; Kyle Lafferty will probably start for Rangers and Andrew Little might feature alongside him in an all-Northern Irish attack for Rangers. Little, also an international, came on as a sub against Hamilton on Sunday. Other options could be Rory Loy or Archie Campbell, but neither have featured much in the Rangers squads over recent weeks.

Smith certainly has a dilemma, with the lack of options avaliable to Rangers this match at New Douglas Park could be more tricky than Rangers would normally expect.