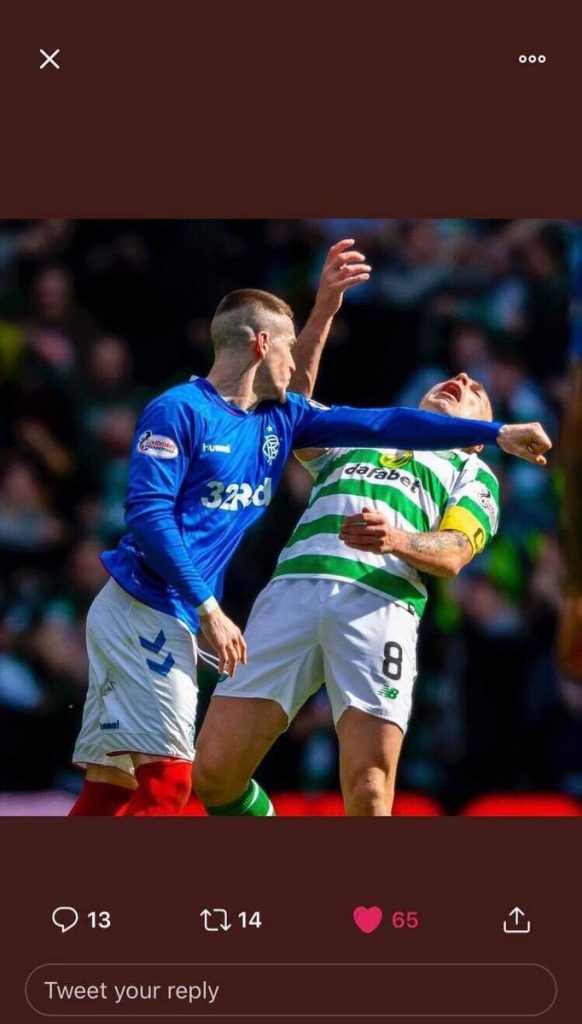 Glasgow Rangers lost 2-1 against Celtic in the Scottish Premiership clash at Parkhead on Sunday.

The Ibrox club now trail the Bhoys by 13 points at the top of the Scottish Premiership table.

In an ill-tempered Old Firm clash, one player who particularly impressed for the Gers was Ryan Kent who joined in the summer on loan from Liverpool.

Odsonne Edouard gave Celtic the lead after 27 minutes, before Alfredo Morelos was dismissed for the fifth time this season for an off-the-ball elbow to the face of Scott Brown.

In the second half, Kent scored a brilliant solo goal to restore parity. However, in the 86th minute, Celtic took the lead again through James Forrest.

It could have been worse for Rangers as Kent remarkably avoided punishment despite punching Celtic’s Scott Brown during the game.

After Forrest struck the winner, Kent struck the Hoops captain in the face as he was celebrating the goal.

Some Rangers fans took to Twitter to react to Kent’s performance. Here are some of the selected tweets:

Scott Brown – “the face of the modern PROFESSIONAL football player” ?
loving Ryan Kent for doing what a load of players from various teams should have done a long time ago…..The hardest man in Scottish football fell down by a punch from one of the smallest men at Ibrox… pic.twitter.com/x2QQ8eD5oI

Ryan Kent rescued it from being a completely shite day.

And he punched Brown.

Fair play a take back what a said, sign him.

Two horrendous passes giving them goals, should have taken at least a point from that. Far better team 2nd half.

Get it done please @RangersFC