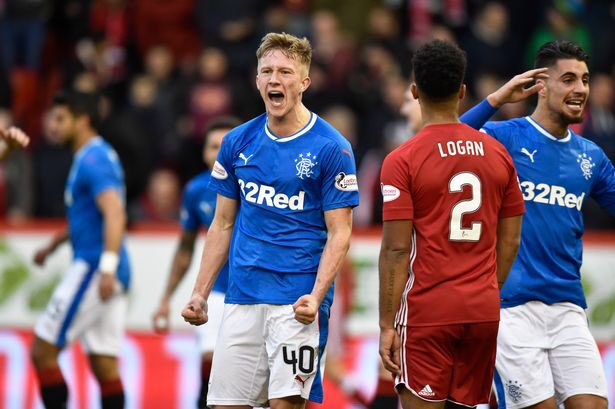 Glasgow Rangers fans have been lauding Ross McCrorie after the defender took to social networking site Twitter to celebrate the Gers’ fantastic win over Dundee at the Ibrox in the Scottish Premiership clash on Saturday.

After three poor results – two defeats and a draw – the Gers returned to winning ways after beating Dundee 4-0 to secure the second position behind Celtic.

Veteran striker Kenny Miller opened the scoring in the 39th minute as Rangers went into the break with a 1-0 lead. In the second half, the home side changed gears, and scored three more goals with Alfredo Morelos, Jamie Murphy and Daniel Candeias all finding the net.

However, Rangers are pleased with the return of McCrorie who put in a strong performance at the heart of defence. The 20-year-old is an exceptional young talent and the Gers fans are happy to see him back in action.

Here is what the Scottish defender had to say:

Loved being back out on the pitch today after a difficult time out being injured! Great result and now onto next weeks game??⚽

Rangers will face arch rivals Celtic in their next game – The Scottish Cup semi-final – at Hampden Park and McCrorie is expected to play in defence.

Most of the fans praised McCrorie’s performance, while others suggested that he could be the future captain of the club. Here is what the fans made of his display against Dundee…

Class oozes out of you. So glad to have you back.

Was great to see you back in the squad today wee man thought you had a fab game. It sure was a great result. Can’t wait for next weeks game got the semi final fever already ??⚽ #RangersFC #cupfever

Great to have you back in the team Ross????⚽

Great performance. Defence is more secure with you in it

Young man you are a credit. As big marvin said. Keep believing. ??watp

All this talk about Tierny annoys me. Yes he’s decent but your so much better and should be getting the same accolades! Win the semi is the start of your fantastic journey!

Good passion ? thought you played well, set the stage for Bruno coming on who looked more comfortable beside Martin

Glad to have you back, hopefully David Bates can get back fit and I think you both could have a great future together at the back or even your moving a step up to midfield

Should be captain the now ?? the guy with it on the now is never a captain thats for sure. If Ross is starting hes captain its that simple