Puyol takes one from Ramos for a 5-star performance 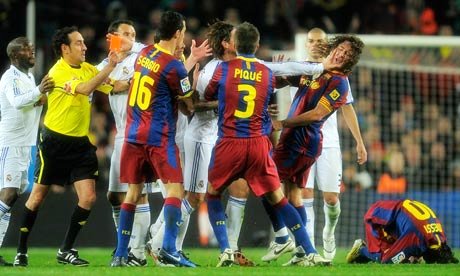 Carles Puyol has been the bigger man by making light of the incident when he was shoved in the face to the the ground by Spain teammate Sergio Ramos during the Monday night El Clasico.

Sergio Ramos was shown a straight red card after lunging into Lionel Messi in the 90th minutes of Real Madrid’s 5-0 defeat at the hands of Barcelona. On his way out, Ramos put his hands into the face of his two Spanish teammates, Puyol and Xavi.

Puyol probably felt for his rivals and told AS:

“These things happen in a game of football. I’ve gone to defend a team-mate of mine because it seemed a very tough tackle.

“They are moments of high tension, but what happens on the pitch stays on the pitch. I have a very good relationship with Sergio Ramos and it’s already forgotten. I have more important things to think about.”

There are always different piques with the players from Madrid because they are our biggest rivals, but it’s a pique on the field of play. We have many friends in the other camp.”

Barcelona are now the only team to defeat Real Madrid this season and score more than two goals against them – they scored FIVE in their fifth consecutive El Clasico win.

“I didn’t expect a thrashing like that but, when you least expect it, it can happen. Now we need to enjoy this victory.

“We had a very complete game and played very well. We started very aggressively, playing our football and everything went perfectly.”

In related news, Jose Mourinho denies that Madrid was humiliated. I think he’s just scared now. This defeat could shatter Madrid and Mourinho’s dream of achieving European glory with this club could be over all too soon.