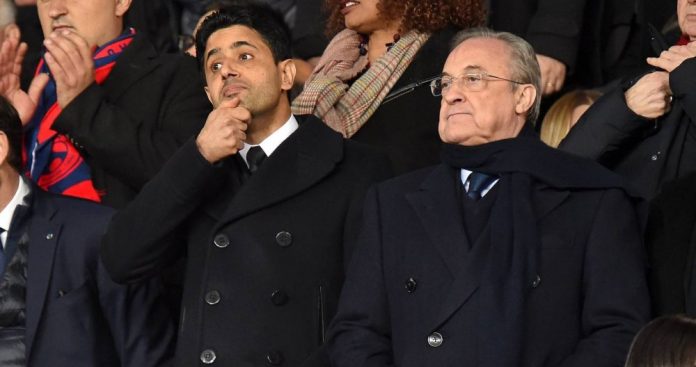 While the clash between PSG and Real Madrid turned out to be a case of one team running for its life while the other one chasing in relentlessly, the Spaniards would be happy to know that they conceded just one goal.

In the backdrop of the game, there was a lot of talk about Kylian Mbappe’s future. The Frenchman has been linked  with a move to Madrid once his deal at PSG expires.

Madrid’s attempts to sign the France international last summer were not appreciated by the French giants. And president Nasser Al-Khelaifi openly criticized Florentino Perez for his approach.

So ahead of the game against Carlo Ancelotti’s men, Al-Khelaifi poured his heart out when given the platform by Canal plus.

“I’m not going to hide it, everyone knows it. We have almost no relationship. I’m not going to go back over what happened. We have very different opinions, mindsets and goals. I believe in football accessible to everyone, from the smallest to the biggest club. That’s what I believe in and they don’t think the same”.

Finally, for all those who still doubt Mbappé’s desire to shine against his, perhaps, future club, the PSG president was clear.

“Kylian is a great champion, with a golden mind, an exemplary professional. And I can confirm that he only thinks of winning these matches. He is proud to play for Paris Saint-Germain, proud to represent his city. But that does not say if the native of Bondy will extend his lease with the Ile-de-France club.

And now that PSG have won the first leg of the competition, the Ligue 1 giants would be eager to down their Spanish foe in Madrid in three weeks’ time.