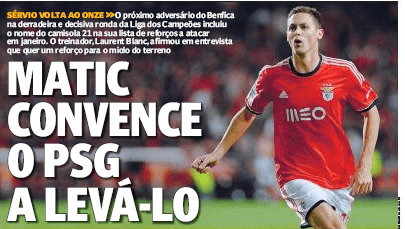 Benfica’s Matic has attracted the interest of a lot of big clubs in Europe, with PSG – Benfica’s oppoents in their next and decisive Champions League match – reportedly being the latest in that list.

At Soccerlens, we have kept you updated regularly about the reports published in Portuguese newspapers about interests of top clubs in him. Manchester United and Chelsea are heavily interested in him and have sent scouts and representatives to collect relevant information, time to time.

Matic is having a dream season so far and recently stated that he is not looking for a move away from Benfica. The 25-year-old said when asked about a move to Old Trafford, “I just think about my club and I’m very happy here.”

However, according to latest report from Portuguese newspaper O Jogo, PSG are seriously considering a winter bid of around €40 million – or even €50m, which is Matic’s buy-out clause.

Laurent Blanc has claimed to be satisfied with his squad but also that he’d like to add a complete midfielder who can play in different positions and has the quality to play between the lines – Matic definitely fits the bill. PSG are bound to face a lot of competition for his signing though, but question remains how serious are Manchester United about his signature? Can they pay €50m to solve their long term problem, that is central midfield?