However, we also have the slightly more urgent matter of nine Premier League ties to be played this weekend (if your weekend extends to Tuesday evening, that is), with some big matches for sides vying for the title as well as those looking to avoid relegation.

Manchester United face two away games in the space of three days, on the back of an away game to Marseille on Wednesday. Manchester City continue their quest for a title / Champions League spot with a game at home against Fulham, Liverpool are away to West Ham and Wolves will be hoping Blackpool aren’t as good away from home as they are at Bloomfield Road.

Before we start predicting results though, I’d like to introduce you to Scoreboard.

Scoreboard is a Premier League predictions game where you play against your friends and other soccer fans on Facebook and try to climb to the top of the league ladder. And it’s free.

In a new twist to your typical prediction games, Scoreboard mixes the typical football prediction game model with a live TV show which will be available to watch – both in full and in match-by-match preview clips – on Facebook.

We’re trying out Scoreboard this week on Soccerlens and we’d recommend you give it a shot too – let’s see if you can better my predictions for the weekend! 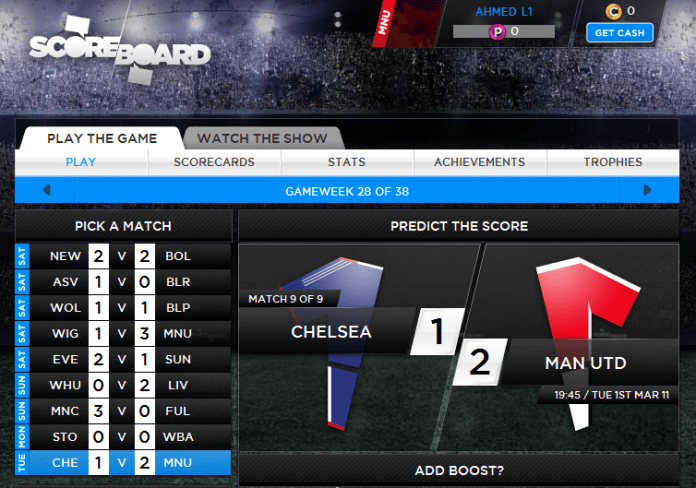 If you think you can beat me in these predictions, take out a few minutes and give Scoreboard a try.

As you might have noticed, I’ve gone with 2 Manchester United wins this weekend, optimistic considering their patchy away form. But it’s squeaky bum time, as Fergie likes to say, and despite the uninspiring performance at Stade Velodrome on Wednesday night, this team will be up for their back to back Premier League away games.

Have a look at our Scoreboard Review, and then try your hand at predicting this weekend’s Premier League results.