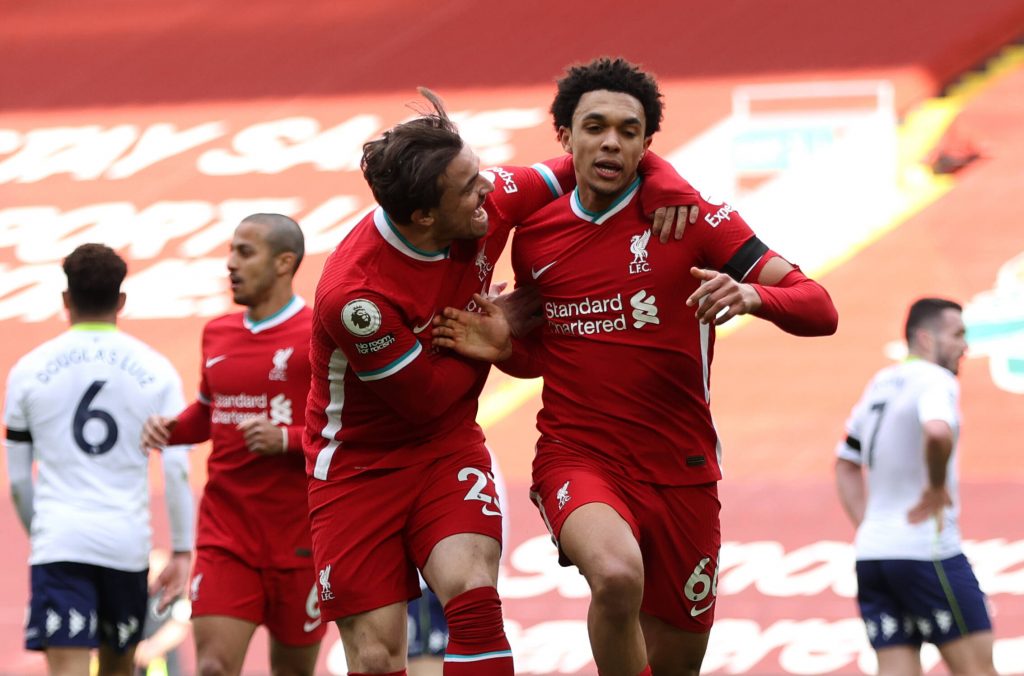 The eight-man shortlist for the Premier League Player of the Month award for April has been revealed.

Three Englishmen make the list, as well as one each from France, Northern Ireland, Brazil, Nigeria and New Zealand.

Having been a surprise omission from Gareth Southgate’s England squad in March, Alexander-Arnold has hit back perfectly.

The right-back began his month with an excellent performance against Arsenal, registering a clean sheet and an assist with a wonderful cross for Diogo Jota’s opener. This was followed by a brilliant last-gasp winner at home to Aston Villa.

He was back among the assists in the following week, setting up Sadio Mane in his side’s 1-1 draw against Leeds United before finishing the month with another draw against Newcastle United.

It’s been an impressive month for Leeds, picking up points against Manchester City, Liverpool and Man United, and defeating Sheffield United.

Dallas has been a surprise package this season, popping up with seven goals and two assists while often playing as a full-back.

The highlight of his month was the trip to the Etihad Stadium. His brace helped the Yorkshire side claim an unlikely three points against the Champions-elect.

After last season’s breakthrough, Greenwood hadn’t pushed on in the way that he’d have hoped. Nonetheless, he has reminded everyone of his immense potential in the last month with several standout performances.

The teenager began April with a late winner at home to Brighton & Hove Albion. The following weekend, he played the role of super-sub, coming off the bench against Tottenham Hotspur to score a goal and record an assist for Edinson Cavani.

He continued this form into the next game, bagging a brace as the Red Devils defeated Burnley 3-1 at Old Trafford.

Last month’s winner is back in the running again, looking to become the ninth player in history to win the award consecutively. And, rather incredibly, he’d be the third to do it this season.

The former Man City man has picked up where he left off in March, scoring four goals assisting two more as Leicester push for a Champions League spot.

Despite being on the wrong end of a 3-2 defeat, Iheanacho put in a good individual showing against West Ham United, scoring twice. In his next Premier League appearance, he bagged the third in a resounding 3-0 win over West Brom.

This was followed by a goal and an assist against Crystal Palace as the Foxes came from behind to win 2-1, before another assist for Jonny Evans in their draw against Southampton.

His highlight of the month, however, did not come in the Premier League. The Nigerian scored the only goal in his side’s 1-0 win at Wembley against Southampton, sealing their place in the FA Cup final.

What a signing Lingard has been for West Ham. Since his arrival, he has been nominated for Player of the Month on all three occasions. Maybe it will be third time lucky this time, having been beaten by Ilkay Gundogan and Kelechi Iheanacho in February and March.

The England international added another four goals to his tally this month, beginning with a strike away at Wolverhampton Wanderers. He also managed an assist in this game for winger Jarrod Bowen.

This was followed by a brace in a 3-2 victory at home to Leicester before netting from the penalty spot in the Hammers’ defeat to Newcastle.

With form like this, will Gareth Southgate include him in his Euro 2020 squad?

It’s been a bit of a miserable season for West Brom, but there has been one obvious highlight – the thrashing of Chelsea at Stamford Bridge.

Since the arrival of Thomas Tuchel, the Blues have been outstanding defensively. Meanwhile, West Brom have been rather blunt going forward. This makes the 5-2 win for the Baggies seem all the more bizarre.

Pereira was the star of the show in South-West London, scoring two and assisting two as his side inflicted a shock defeat on the Champions League finalists.

The Brazilian added two more to his tally in the next few weeks, netting spot-kicks against Southampton and Aston Villa.

Newcastle had a tough line up of fixtures going into April, facing three of the ‘Big Six’. Despite this, they managed to come away with just one defeat, getting eight points on the board to almost guarantee their survival.

They owe a huge debt of gratitude to Saint-Maximin for three of these points. After being left on the bench away at Burnley, the Frenchman was brought on and made an immediate impact.

Within seven minutes of his introduction, Saint-Maximin had got an assist for Jacob Murphy as well as a beautiful solo goal, putting his side 2-1 ahead.

The winger also contributed to the Magpies’ victory against West Ham, forcing Issa Diop’s own goal.

Burnley were another club in danger of relegation, but they have managed to put themselves in a strong position going into the final four. The performances of Chris Wood have been a big reason why.

The former Leeds man kicked off April with a goal and an assist against Southampton and added another assist to his collection against Newcastle.

It was at Molineux where the forward really starred. By half time, Wood had already wrapped up his first-ever top-flight hat-trick, and he managed to get his third assist of the month in the second half.

Rounding off the month, Wood converted a penalty in Burnley’s 2-1 home defeat to West Ham, ending April with an impressive five goals and three assists.