Paul Pogba’s transfer from Juventus to Manchester United was confirmed in the wee hours of today and the French midfielder in the process became the most expensive player ever eclipsing Real Madrid’s Gareth Bale. There have been plenty of high profile transfers from Italy’s top flight to the Premier League, but none created quite the wave as the Pogba move. Here we run down ten of the most expensive transfers from Serie A to the Premier League.

A former Manchester United player, Pogba returned what he called “home” after spending four highly successful years at Juventus. The dynamic midfielder won four Scudetti and two Italian Cups with the Old Lady after leaving Manchester for Turin in 2012 for £800,000. The 23-year-old has also featured in a Champions League final with Juventus and a European Championship final with France, ending up on the losing side both times.

A little more than 10 years ago, Shevchenko’s move to Chelsea broke the British transfer record. However, the Ukrainian failed to assert himself in the rough and tumble of Premier League football, scoring only nine goals in 48 games in the blue of Chelsea in two seasons. His unproductivity at Stamford Bridge is attributed by some to his age; Shevchenko was 29 and considered past his prime when he landed in King’s Road.

The Argentine midfielder arrived in Manchester as the most expensive transfer in English football in the summer of 2001. Much was expected from Veron, who had led Lazio to the Serie A title in 2000 but despite some promising performances for the Red Devils, his time at Manchester United was largely seen a failure. He was sold to Chelsea two seasons later, but never reached the heights of Lazio again.

The Colombian was bought by Jose Mourinho’s Chelsea in January 2015 for a fee upwards of £26m but failed to make the desired impact at Stamford Bridge. Cuadrado was offloaded on loan to Juventus the following transfer window and after a productive season with the Old Lady in 2015/16, the 28-year-old is now back with Chelsea, hoping to catch new manager Antonio Conte’s eyes.

Lamela’s arrival in north London smashed Tottenham’s transfer record and the Argentina international has had his fair share of success at White Hart Lane after a less-than-inspiring start following his move from AS Roma in the summer of 2013. Lamela is now a vital cog in Mauricio Pochettino’s youthful Spurs side, and almost helped the Lilywhites to their first Premier League title last season. 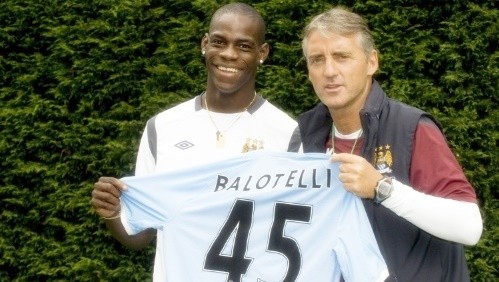 One of the hottest prospects in world football when he set foot in England, Balotelli was prized away from treble winners Inter Milan in the summer of 2010, the deep pockets at Manchester City parting with a sum upwards of £20m. Balotelli’s arrival coincided with Manchester City’s greatest period of success in recent memory, as the Italian helped the Citizens to their first Premier League title and the FA Cup.

Jovetic arrived from Fiorentina in the summer of 2013 but his first season at Eastlands was curtailed by injury as the Montenegrin made just two starts in the league. He missed 39 games in the 2013/14 season, and was never really endeared by the City faithful. Jovetic’s time at the club was cut short last summer when he returned to Italy to join Inter Milan on a 18-month loan deal.

One of Roman Abramovich’s first signings at Chelsea, Crespo arrived at Stamford Bridge as a deadly marksman, having already been involved in a world record transfer from Parma to Lazio in 2000. Crespo never really settled in west London and returned to Italy with AC Milan just a season later on loan. Crespo netted 10 league goals during his first spell at Chelsea, and had a similar goal return during his second season at Stamford Bridge in 2005/06.

Kolarov arrived from Lazio as one of the most exciting full-backs in Serie A and played a key role in Manchester City’s rise to one of the elite English clubs in the last few years. The Serb has won two Premier League titles with the Citizens, two League Cups and one FA Cup. At 30, Kolarov is expected to play in a bit-part capacity in the upcoming season; his versatility and experience being important assets for a club in transition.

Aquilani arrived from Roma as Liverpool’s replacement for the Real Madrid-bound Xabi Alonso but injuries and lack of form meant the Italian looked off the pace during his time with the Reds. One of the worst ever signings of the Rafa Benitez era, Aquilani played only 18 league games for Liverpool before being shipped back to Italy where he had spells at Juventus, Milan and Fiorentina.