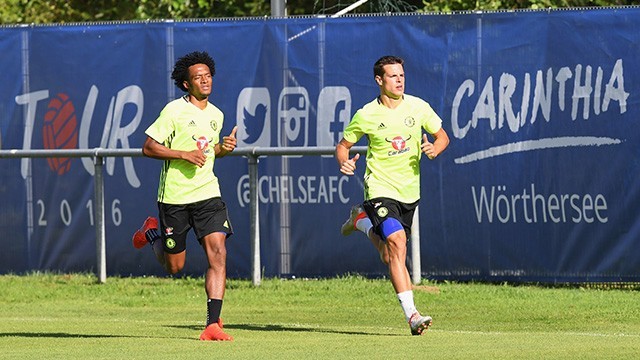 Chelsea winger Juan Cuadrado has returned to Chelsea from his loan spell at Juventus.

Chelsea have announced on their official website that the player is back in training. The Colombian is seen training with Azpilicueta in Austria, where Chelsea take on WAC RZ Pellets tomorrow.

The Italian champions wanted to make the move permanent but Antonio Conte wanted to bring back the Colombian.

Earlier this week, Conte revealed that he has always been impressed with the player’s abilities and wanted to sign him during his time at Juventus. The Italian also hinted that Cuadrado is a part of his plans at Stamford Bridge.

It will be interesting to see how the Colombian reacts to this decision now. It was evident that he wanted to stay in Italy after a poor spell in the Premier League under Jose Mourinho.

However, Conte’s usual 3-5-2 could play to Cuadrado’s strengths and might finally allow him to shine in England.

Despite the manager wanting him to stay, the final decision always rests on the player.

Cuadrado impressed on loan at Juventus and in Copa America this summer and Conte will be hoping for a similar impact at Chelsea next season.