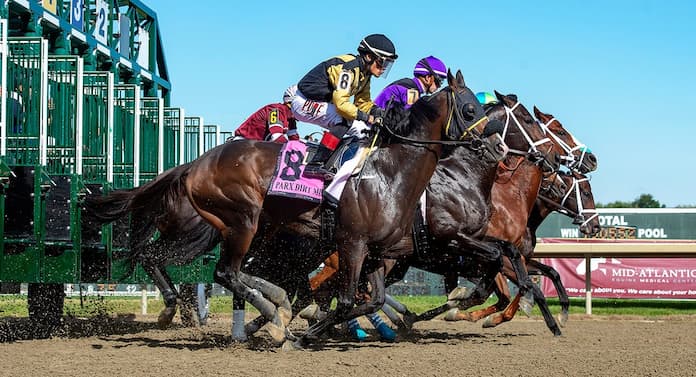 The Pennsylvania Derby has 11 horses engaged to run in Saturday’s $1m Grade One Parx contest, with the likes of Taiba, Cyberknife and Skippylongstocking three of the star names entered – check the latest betting for each runner below too.

We’ve six horses that ran in the Kentucky Derby earlier his season included in the 11 entries for Saturday’s Pennsylvania Derby – Let’s take a look at them in more detail.

Yet to finish out of the top three from 7 career runs. Was third in the Kentucky Derby earlier this year and has since run second in the Jim Dandy Stakes and third in the Travers – behind Epicenter both times (watch below). First run at Parx, but is a versatile sort when it comes to different tracks, having raced at 6 different venues. Trainer Chad Brown won this race in 2016. Overall a very consistent sort, but has won just one of his last 6. Place Claims

Four wins from 10 starts is a fair return for this Keen Ice colt. Based here at Parx is a plus and is a winner at the track, but this is a big step up in grade here and would be a shock winner despite his proven track form. Overlooked

From last year’s winning Penn Derby barn of Doug O’Neill. But is only an allowance winner so far and would need more on that recent victory at Ellis Park. Overlooked

Represents the Saffie A. Joseph team that won the Penn Derby in 2019 with Math Wizard. Skippy was last seen winning the West Virginia Derby at Mountaineer, with We The People 1 1/2 lengths back in 2nd. Prior to that run was 3rd in the Belmont Stakes and 5th in the Preakness Stakes. Live Outsider

Has the most career earnings on show here. Winner of 5 of his 10 starts and two of those came at Grade 1 level after taking the Arkansas Derby and Haskell Stakes, beating Taiba (watch below). 18th in the Kentucky Derby before those wins too and was second in the Runhappy Travers Stakes behind the classy Epicenter last time at Saratoga. One of the leading 3 year-olds this season and heads here with a huge chance. Trainer Brad Cox is looking for his first Penn Derby success but this horse could easily put that right! Win Chance

Second to Skippylongstocking last time in the West Virginia Derby, so needs to find a bit to overturn that form. Before that was an easy winner of the Peter Pan Stakes at Belmont Park and then backed that up with a 4th in the Belmont Stakes. Likes to get on with things from the front, but likely to be setting the race up for the closing pack. Overlooked

Another from the Brad Cox yard that also have Cyberknife in the race. 7th in the Kentucky Derby (watch below) earlier this season and progressed since to win the Ohio Derby and was then third in the Jim Dandy behind Epicenter and Zandon. Place Claims

Just touched off behind Cyberknife last time out and takes on his half-brother again – beaten a head. Lightly-raced with just 4 career runs, so you feel there is more in the locker and will be ridden by Mike E. Smith, who has won the Penn Derby twice and both times for trainer Bob Baffert too. With three wins in total, Baffert will have a top chance of making that four here and rates one of the leading fancies. Win Chance

Third in the Florida Derby behind White Abarrio earlier this season and went onto be 4th in the Kentucky Derby (watch below). Followed that with a 6th in the Preakness and after a break was last seen running a fair third to Skippylongstocking in the West Virginia Derby. More needed but not without a place squeak. Place Claims

Just 7 career runs (3 wins), but have all been in non-graded races. Last seen running second in an Allowance at Saratoga in July, so would need to find some improvement in now running at the top table. Overlooked

Winner of 50% of his 8 starts and another from the 2019 winning yard of Saffie A Joseph Jr, who took the Penn Derby in 2019. Landed the Florida Derby this season (watch below) and since been in action when 16th in the Kentucky Derby, 2nd in the Ohio Derby and most recently 7th in the Haskell Stakes. Needs to find something to close the gap on those ahead of him in the Haskell, but has been freshened up since and also done work at Saratoga, which is a deep track like Parx. Place Claims

The likes of White Abarrio and Simplification have chances of hitting the places, especially White Abarrio who has had a break and been sent to work at Saratoga to prep for this – it’s a deep surface like Parx.

Tawny Port and Skippylongstocking look sure to have a say too, but this could be another shootout between Cyberknife, who has the most career earnings on show here, and Taiba, who he beat last time in the Haskall Stakes (watch below).

It was a good battle that day and the small worry for both their backers is if it’s left it’s mark. With that in mind, the lighter-raced on the pair – TAIBA @ 33/20 With Bovada, who has only been on the track four times, get the call to overturn that head defeat last time and give trainer Bob Baffert a fourth Penn Derby.

Brad Cox on Cyberknife: “He’s had two good works since shipping here to Churchill from Saratoga. We’re trying to get to the Breeders’ Cup and he’s doing so well, I felt I could run him, it’s not like we’re just running. It could add some value to him as a stallion. It’s a million-dollar race and a Grade 1. We think it makes sense to take a swing.”