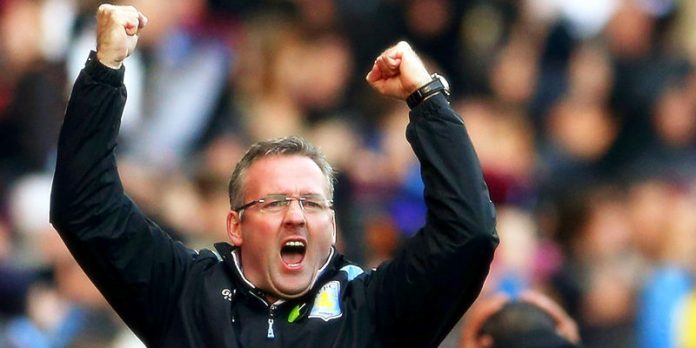 Paul Lambert is preparing Aston Villa to face Manchester City in the Premier League match at the Villa Park. The Villans have had a forgettable season so far and they sit at the brink of relegation. They have conceded twice as many goals as they have scored.

Paul Lambert is still looking to rejuvenate his players as any slip-up at this stage will leave them chasing Southampton and Wigan in the relegation battle. Being behind on goal difference, they need to stay on their toes and grab maximum points possible from the remaining fixtures.

As part of the League Managers Association, Yahoo has interviewed the Aston Villa coach Paul Lambert. Here’s the complete transcript of the interview:

Question: How would you assess Aston Villa’s season to date?

Paul Lambert: Tough, but I think every season is hard, even if you’re doing really well, you’ve still got to earn every win. I think we should have more points than we do because we played well in some games and came away with nothing.

We’ve also been leading by two goals in some games but still couldn’t see it through. However, there are still a lot of games to be played and points to be played for.

Q: How are you approaching the rest of your matches this season and do you have a points target in mind?

PL: We don’t have a points target as such because you can never be sure how well a team is going to do. As I said, there are a lot of points to be played for over the next 11 games, so we’ll just have to wait and see.

With the way the lads are playing at the moment I can see us picking up some really good wins. In respect of a points target I’m really not sure what is going to be enough to keep any of the teams up.

Q: You’ve said moral in the squad is still high despite the relegation battle you’re in, what can you do as a manager to ensure there is always a positive atmosphere at the club?

PL: That is something we have always tried to do whether we have won, lost or drawn. We always try and keep things upbeat and don’t dwell too much on a loss but instead try and keep a level playing field, this way everyone can keep enjoying their football.

There is nothing worse than coming into a workplace which is negative and down, that’s when you can start to lose the players. The important thing is not to feel sorry for yourself, you have to stay positive.

Q: What are you enjoying most about the Aston Villa job?

PL: I love the challenge of it. The size of the club underlines just how big a challenge it is and I love the pressure of that. It is a great club to be associated with and the fans have been great, they’ve stuck with us and that has been a huge help. I hope over the next 11 games we can see the job through for them.

Q: When you pick the team do you start with a tactical system and fit players into that, or do you choose the players and adjust the system accordingly?

PL: The players make the system. There is no point in picking players that are not comfortable with the system. We always have a rough idea of what we’re going to play on a Saturday, by the Thursday prior to the game. To be fair the players can adjust to different systems, but the onus is always on the players.

Q: How do you introduce players into the first team during a relegation battle and how difficult is it to leave experienced players out of the side?

PL: You know that when you bring in young players they don’t have a fear or feel the pressure as much as when they get a bit older. I don’t have a problem playing young players at all, if you’re good enough then I’ll throw you in, everyone has to have an opportunity to perform.

It is tough to leave an older player out, especially a seasoned one who has played 100 or 200 games, but you always have to make the decision which is right for the football club. You hope when you do leave someone out that they understand and are professional about it.

I do always try and tell the experienced ones beforehand that I’m going to leave them out so it’s not a shock to the system when the team is read out.

Q: Christian Benteke has been one of your major positives this season, how did you come to sign him and how much has he impressed you?

PL: We signed him because I thought we needed a striker like him at the football club. I felt we needed a target man so we looked around and saw Christian playing at Genk.

He actually played with a striker partner that we looked at beforehand. We were looking across several different leagues at people but went back to watch Christian again and things moved from there.

We watched him more and one of the scouts saw him playing for Belgium and we decided to take a chance. Nobody really knew too much about him before he arrived, but since he has I think his performances have been exceptional.

Plus he is also playing in a really good Belgian national team, is still only 22-years-old and probably won’t hit his peak until his late twenties.

Q: Last summer you brought in several players from the lower leagues: Bowery; Bennett; Lowton; Westwood. How much quality is there in the football league that people aren’t aware of?

PL: It’s a difficult one to answer because people presume that unless you come from the top leagues you’re not good enough but Christian proves that is not true as he came from Genk. People might have looked at that and said the Belgian Pro League isn’t good enough, perhaps comparing the standard of football to the Championship.

Benteke came in and pulled up trees and then people mentioned that he was playing in an excellent national team but his club side were nothing like that.

There are different ways to perceive it, you need to give people opportunities like Ashley Westwood who hasn’t wasted a ball for us this season, he has a great skill in being able to keep the ball moving.

Similarly, Fabian Delph came from Leeds United who were a League One team at the time and he has done great for us. Bennett has done well too.

As I’ve said before, if you’re good enough I’ll pick you irrespective of age or where you were playing. People shouldn’t allow themselves to think that just because you come from a lower league means you are an inferior player.

You might buy a player from a league that is considered strong and they might not be up to it either. You just have to rely on your own judgement.