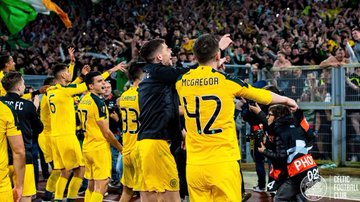 Celtic secured their passage to the Europa League last 32 after earning a pulsating 2-1 victory against Lazio in Italy on Thursday night.

The Bhoys, who won against Lazio at Parkhead, earned a dramatic victory, with Olivier Ntcham scoring a 95th-minute winner to send Celtic fans across the world into delirium.

McCourt was especially pleased with Celtic’s performance in the second half. He has showered praise on Edouard, saying he is a ‘top player’, and also played Ntcham for scoring the winner.

What a brilliant second half performance by Celtic ‘ Edouard showed again that he really is a top player & what a superb finish from Ntcham for the winner 👏. Well played lads 🍀🙌.

McAvennie praised the entire team for the wonderful performance, saying it is a ‘great effort’ from the Bhoys.

The Bhoys kept the composure intact and restored parity through James Forrest who scored his 11th goal of the season just before the break.