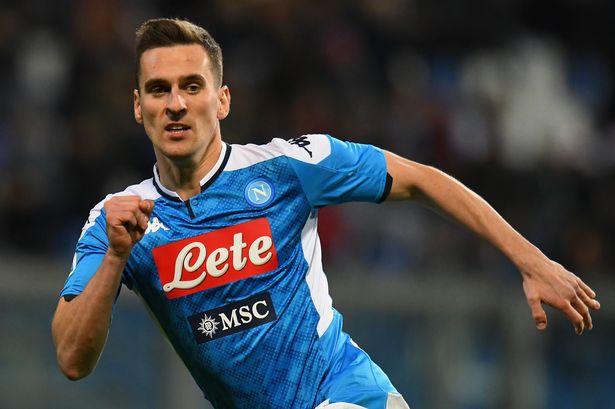 Everton boss Carlo Ancelotti insisted after his side’s FA Cup defeat against Liverpool that he would be looking to bolster the squad in January.

While adding a defender could be one of Ancelotti’s targets, the Italian could look to bolster his attacking options this month. With Cenk having already left, and Moise Kean failing to impress, Ancelotti cannot afford to go into the rest of the season solely relying on young Dominic Calvert-Lewin to deliver.

Getting the right kind of player is often difficult in January, but Everton must try to get a top-class striker this month. And that is why they must move for Napoli striker Arkadiusz Milik who is attracting interest from several Premier League clubs including Tottenham Hotspur.

Earlier this month The Mirror reported that Spurs are considering Milik as a potential transfer target this month to replace the injured Harry Kane.

The Polish international has scored 10 goals in all competitions for Napoli in 2019-20. His contract expires next year and Everton must act now and secure his signature.

He has played under Ancelotti and could be willing to follow him again by moving to the Premier League. Milik would cost in the region of £60 million (h/t The Sun), but surely Everton should look to negotiate a deal at a reduced price, possibly offloading Kean as a part of the deal.