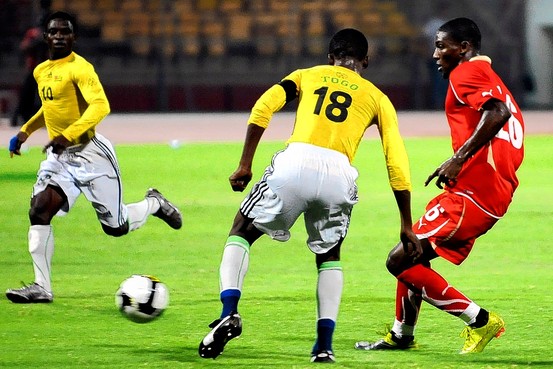 On this day in 2010, Togo played Bahrain in an international friendly in Riffa and lost 3-0. What is interesting about that? Well, the team that played Bahrain was a fake side masquerading as the official Togo national team.

Apparently, $60,000 was spent on flights, hotels and the match-day gimmicks for Togo to play the Bahrain national side. The game started as usual without any suspicions. Bahrain’s Austrian manager Josef Hickersberger took his place in the dug-out eagerly hoping for his first win managing the Gulf country. The players lined up, the national anthems were sung and the referee blew his whistle to signal the start of the game.

Although not the greatest of international sides, you still expected Togo to brush aside Bahrain. But something was amiss. Nobody had the faintest of ideas as to who these players were running about on the pitch wearing the Togo shirts.

Bahrain took an early lead through Jaycee Okwunwanne. The Nigerian born naturalised Qatari citizen added another just before the break giving his side a 2-0 lead. A penalty from Ismail Abdul-Latif in the second half gave Bahrain a surprisingly comfortable 3-0 win.

After the game, Hickersberger was quoted as saying that the match was ‘very boring’. “They [Togo] were not fit enough to play 90 minutes – the match was very boring,” he said.

The news of Togo’s embarrassing defeat reached Lomé. But the country’s Sports Minister Christophe Tchao claimed that nobody had been informed of such a game.

“The players who took part in the friendly against Bahrain were completely fake,” said Gen. Seyi Memene, the president of Togo’s football association. “We have not sent any team of footballers to Bahrain.”

None of the 18 players registered to play the game against Bahrain were Togo internationals.

An investigation was launched and as it turned out, the chief mastermind behind the whole thing was the former Togo coach Bana Tchanilé.

Tchanilé was no stranger to fraudulence. Earlier that year he took a group of Togolese footballers to play a tournament in Egypt without the consent or knowledge of the Togo FA. He was given a two-year ban for that. He was apprehended once again and was slapped another ban for three years. Quite bizarre, indeed.