On this day in 1913, Arsenal, then going by the name of Woolwich Arsenal, played their first ever game at the Highbury stadium.

It was the beginning of the 1913-14 season and Arsenal had just moved from Manor Ground in South East London to the north of the river Thames. The new stadium had not been fully completed yet as Arsenal hosted Leicester City, then known as Leicester Fosse, in a Second Division match.

The club had been relegated at the end of the previous season in the top flight. Leicester’s Tommy Benfield became the first player to score at Highbury as he put the Foxes ahead in the first half. Arsenal defender George Jobey entered the history books shortly afterwards as he nodded in the equaliser from a Tommy Winship cross.

Deep into the second half, with just 12 minutes remaining on the clock, Arsenal were awarded a penalty after a Leicester player handled the ball inside the box. Up stepped the Scotsman Archibald Devine to take the penalty in front of 20,000 fans gathered in the stadium. His goal from the spot secured a 2-1 opening day victory for Woolwich Arsenal in their new home.

It will be a travesty if we do not mention at least one amusing fact from the day.

George Jobey received a kick on his back that resulted in a few bruised ribs. With no dressing rooms or running water available inside the stadium, he had to be taken to his home to be treated.

So he was put on the back of a cart borrowed from a local milkman and carried off to his house. This means Jobey holds two records – first player to score at Highbury and the first player to be stretchered off because of injury.

On this day in 1989, England played a crucial World Cup qualifier against Sweden in Stockholm. The Three Lions required a win to stay on course of qualifying for the grand event in Italy the following year.

Early on in the game, defender Terry Butcher suffered a deep gash to his forehead. The Rangers man was immediately attended by doctors who patched him up using stitches and a ton of bandages. Butcher returned to the game but playing at the heart of defence involved a lot of heading of the ball.

The constant heading managed to break apart the bandages while reopening the deep cut. The blood flowing from his head turned his white England shirt red. It was a sight to behold.

He continued playing as England managed a 0-0 draw. 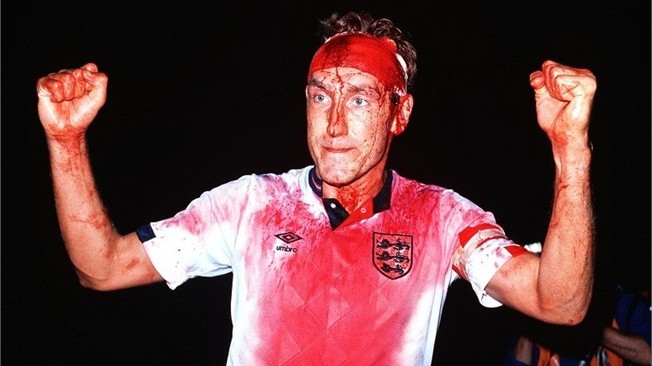 The Scorpion from Colombia

On this day in 1995, England played a friendly against Colombia at Wembley. The match ended 0-0 and probably would have been forgotten in history if not for the eccentric Colombia goalkeeper Rene Higuita.

The Atletico Nacional custodian produced the famous ‘scorpion kick’ clearance off a Jamie Redknapp cross. You better see it to believe it…