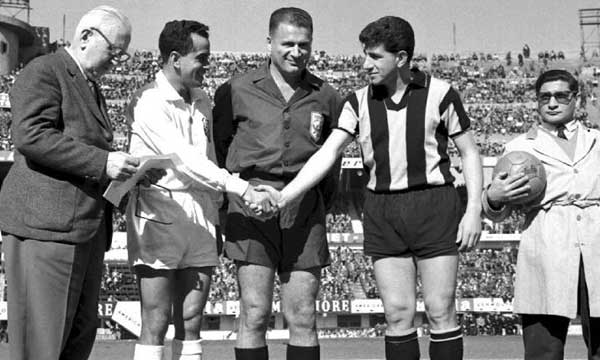 On this day in 1962, Santos won their first ever Copa Libertadores title by beating Uruguayan side Peñarol 3-0 in a play-off thanks to a brace from Pele.

Peñarol were playing their third successive final after winning the first two editions of the tournament in 1960 and 1961. The final was to be played over two legs and decided by points – two for a win, one for a draw and zero for a loss. Peñarol lost the first leg 2-1 at the Estadio Centenario in Montevideo with Coutinho scoring twice for Santos. They got their revenge in the return leg played at the Estadio Vila Belmiro. Two goals from Alberto Spencer and one from Jose Sasia earned the Uruguayan club a crucial 3-2 victory. Both teams now level on points, a play-off beckoned.

The terraces of El Monumental in Buenos Aires were graced by 60,000 fans as the two South American heavyweights lined up against each other. A 20-year-old Pele who had not featured for Santos in the two legs started the game alongside Coutinho and Jose “Pepe” Macia.

Peñarol were in the back foot in the 11th minute after defender Omar Caetano put the ball in his own net. The score remained 1-0 at half-time. Pele doubled Santos’ lead four minutes into the second half before scoring another in the 89th minute to give Santos a convincing 3-0 victory. Peñarol’s dominance in the competition came to an end.