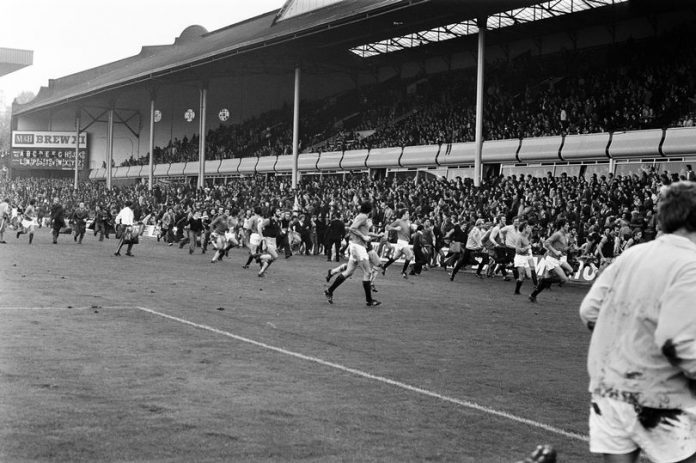 On this day in 1976, Aston Villa played Glasgow Rangers in a friendly. The game had to be abandoned in the 53rd minute as fights erupted all across Villa Park resulting in one of the worst episodes of hooliganism in Britain’s football history.

Trouble had erupted way before the Rangers faithful arrived in Birmingham. Thousands of fans took the night train from Glasgow, which itself was delayed because of some commotion. Apparently, few of the fans were dropped off in Wigan. According to some eyewitnesses, some Rangers fans were in and around Birmingham’s city centre as early as 3 AM in the morning. The many coaches carrying the fans were ordered not to arrive at Villa Park until an hour before kick-off. But fifty or so coaches were already in town nine hours before the scheduled time.

Fans, as you would expect, indulged in heavy drinking before the game. Two Rangers fans found themselves in Birmingham Magistrates Court four hours before kick-off and were fined £135.

The game started without any further inconveniences. The Rangers faithful were in full voice in the Holte End as Dennis Mortimer put Villa ahead. The first signs of trouble were noticed at half-time when fans at the back of the Holte End charged forward causing the fans standing in the front to spill on to the pitch. Nevertheless, the second half went ahead while stewards carried injured fans off the field on stretchers.

Winger Frank Carrodus doubled Villa’s lead in the 52nd minute. And that is when all hell broke loose. A miscellany of missiles, bricks and bottles were thrown onto the ground as more than 200 Rangers fans invaded the pitch. Managers Jock Wallace and Ron Saunders signalled their players to run to the tunnel. Referee Derek Civil, witnessing the mayhem around him, decided to abandon the game.

According to some accounts, fights continued outside the ground. Scores were injured, some very seriously, marking a horrible day for British football.

There’s only one team in Tallinn!

On this day in 1996, Scotland did not play Estonia in a World Cup qualifier in Tallinn. Wait, what?

Scotland made an arduous journey to Estonia in 1996 to play a crucial World Cup qualifier. The day before Scotland’s game, the two countries’ U-21 sides played each other at the Kadriorg Stadium. Craig Brown, the senior team boss, after witnessing the game claimed that the floodlights did not provide adequate lighting. Brown urged the FIFA delegates present in the stadium to look into the matter. A call was made to the FIFA headquarters in Zurich and a decision was made to bring the kick-off time forward by three hours.

The Estonians were not pleased at all. Estonian Football Association’s General Secretary Ainar Leppanen insisted later that it was impossible to change travel arrangements.

Scotland arrived at the stadium as per the new timing, only to be greeted by 800 or so of Scottish fans with nary an Estonian in sight.

The teams, or just the one team, lined up alongside the match day officials. The national anthems, or just the one anthem, was sung and the game kicked off. The Scottish fans were in full voice, belting out chants like “There’s only one team in Tallinn!” or “We only play in the daylight!”

Captain John Collins rolled the ball forward at the referee’s signal and stopped it three seconds later respecting the final whistle. The match was abandoned.

FIFA decided that the game had to be rescheduled and the two teams met the following year in February to play a drab 0-0 draw in Monaco. The Scots qualified despite the result while Estonia did not.

They should have arrived at the stadium at 3 o’clock.