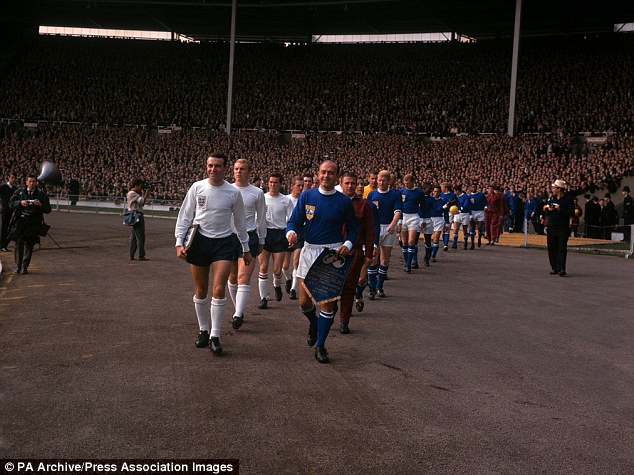 On this day in 1963, the Football Association celebrated its centenary by staging an England vs Rest of the World XI match at the Wembley Stadium. England won the game 2-1.

This was the first time in football history that an assembled team of global superstars played against a single nation. It was a sold out as 100,000 eager fans filled the Wembley seats to watch the spectacle. The match-day programme boldly proclaimed that it was the ‘greatest match ever to be staged’.

The two teams were as follows:

Jimmy Greaves, arguably English football’s greatest goal scorer, started the game in menacing fashion but Lev Yashin, arguably the game’s greatest ever goalkeeper, was up to the challenge and made a series of saves to deny the 23-year-old Greaves from scoring. However, that soon changed when Yashin was replaced by Partizan Belgrade and Yugoslavia custodian Milutin Šoškić.

This possibly turned the tide of the game a bit as the Three Lions took the lead in the 66th minute. A lofted pass from the deep found Greaves who being surrounded by defenders, failed to control it. But the ball somehow found its way to the left foot of Southampton legend Terry Paine who put the ball in the back of the net.

The Rest of the World team, led by the frightening strike force of Law, di Stefano and Eusebio, continued to threaten but Gordon Banks made a number of decent saves to protect England’s lead. The equaliser finally came through Law who went past Banks with a lovely piece of footwork before slotting the ball in.

England’s saviour came in the form of Greaves just three minutes before the final whistle. Bobby Charlton, on one of his trademark surging runs inside the box, hammered one powerful shot towards Šoškić who failed to grasp it. Greaves capitalised on the situation by putting the loose ball past him.

Wembley erupted as England beat the best players on the planet.