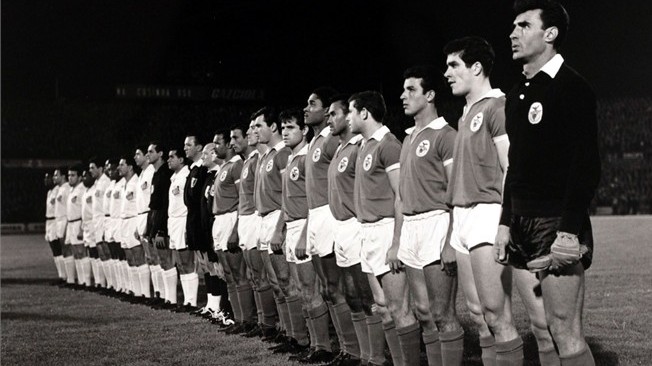 On this day in 1958, the late great Bill Nicholson was appointed as the manager of Tottenham Hotspur. The same afternoon, overseeing his first game in charge, Nicholson guided Spurs to an emphatic 10-4 victory over Everton at White Hart Lane.

Not a bad start.

Nicholson, a formidable wing-half, spent the entirety of his senior playing career at Spurs amassing over 300 appearances for the club. Upon retirement, he undertook an FA coaching course before joining the coaching staff at Tottenham. He won an impressive eight major honours during his 16-year tenure as Spurs manager, including a famous league and FA Cup double in the 1960-61 season.

Nicholson also won a European Cup Winners Cup and a UEFA Cup in 1963 and 1972 respectively.

On this day in 1962, Santos beat Benfica 5-2 to win their first Intercontinental Cup.

The first leg was played at the Maracana in Rio where Pele scored a brace to give Santos a narrow 3-2 victory. Benfica’s two goals came from the brilliant Joaquim Santana. With the second leg evenly poised, the Portuguese had plenty of reasons to be optimistic about overturning the tie at the Estadio da Luz in Lisbon. But Pele had other ideas.

The Brazil legend scored a superb hat-trick and Santos ran out 5-2 winners, recording an aggregate score of 8-4. Eusebio did get on the score sheet in the 85th minute but it was too little too late.

First recorded game of football on US soil

On this day in 1866, the first game of football on US soil took place in Waukesha in Wisconsin.

Other forms of football, or soccer as our American brethren call it, may have taken place before the aforementioned date but this match between Carroll College and a Young Men of Waukesha XI is the first known game played under the Football Association laws. The official FA regulations were formulated in 1863 so it is speculated that a British student studying at Carroll College, or just visiting Wisconsin one summer, introduced the rules to the local students.

The landmark match lasted close to an hour-and-a-half with Carroll College triumphing 5-2. Here is an extract from the October 16 edition of the Waukesha Freeman covering the game:

On this day in 2006, Croatia beat England 2-0 in a qualifier for the 2008 UEFA European Championship.

Played in the Stadion Maksimir in Zagreb, England fielded a very strong team that featured the likes of Rio Ferdinand, John Terry, Frank Lampard and Wayne Rooney among others.

The first half ended 0-0 but Eduardo’s header in the 61st minute gave Croatia the lead. Eight minutes later, Gary Neville upon receiving ball just outside the England d-box, passed it back to goalkeeper Paul Robinson. The ball hit a divot on its way, bounced over Robinson’s swinging leg, and rolled across the line resulting in one of the most hilarious own goals in the sport’s history.

You have to see it to believe it.