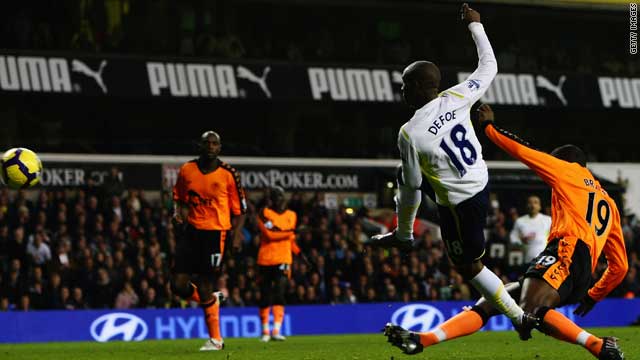 On this day in 2009, Tottenham Hotspur recorded their record win in the Premier League by hammering Wigan Athletic 9-1 at White Hart Lane.

Peter Crouch gave Spurs the lead in the ninth minute but Harry Redknapp’s side hardly created any further chances to double their lead in the first half. The two teams went into the interval with the score line reading 1-0. Spurs unleashed hell after what must have been some half time team talk from Redknapp.

Jermaine Defoe got on the score sheet in the 51st minute and had five goals to his name by the end of the game. Aaron Lennon and Niko Kranjcar added a couple more and a Chris Kirkland own goal made it nine for Spurs. Wigan had pulled one back at 3-0 with a controversial goal from Paul Scharner. The Austrian appeared to handle the ball before putting it in the back of the net.

On this day in 1971, Oxford City and Alvechurch finally ended the longest tie in the history of the FA Cup after playing each other six times!

The two teams met in the fourth qualifying round of the competition and drew the first game 2-2. The replay ended in a tie as well, as did the next three matches with the scores of 1-1, 1-1, 0-0, and 0-0. The sixth and final replay was played at Villa Park with Alverchurch winning 1-0 thanks to a goal from Bobby Hope in the 588th minute!

“Before the first match we didn’t know them, either as a team or as individuals, but by the end we were on first name terms,” writes Alvechurch’s Graham Allner who played each and every minute of the tie.

“We’d turn up and it would be, ‘Hey there Bill’, ‘How are you Pete?’, that kind of thing. We got to know each other, and we got on really well.

“They had a lot of army players at the time and they weren’t bad, either as a team or as people. Obviously they were hard to beat. “