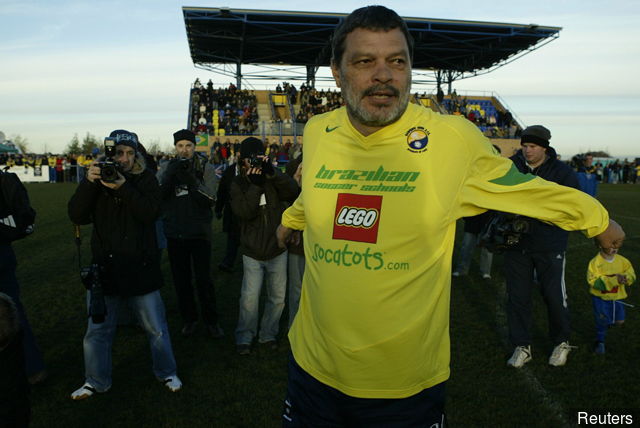 On this day in 1971, Third Division club Bournemouth thrashed Southern League side Margate 11-0 in the first round of the FA Cup with nine of the goals coming from Ted MacDougall.

MacDougall scored five of his nine goals of the game in the first half which prompted Margate manager to jokingly request his Bournemouth counterpart to substitute MacDougall for the second half. Cherries boss John Bond, evidently a man with an excellent sense of humour, kept MacDougall in the game and the striker went on to add four more to his tally.

His nine goals is still an FA cup record for most number of goals scored by a player in one game. MacDougall joined Manchester United in 1972 but the Scotsman could not recreate his Bournemouth form for the Mancunians. He was sold to West Ham United after just one season at Old Trafford.

On this day in 2004, Socrates, no not the fith century BC Greek philosopher, but the Brazilian footballing legend, made a remarkable comeback 15 years after his retirement to play for Garforth Town.

Garforth played in the tenth tier of English football and were entertaining Tadcaster Albion at home. With the scores tied at 2-2, Garforth boss brought on the 50-year-old Socrates. The former Brazil captain hammered a shot from 25 yards out forcing a save from the Tadcaster keeper but unfortunately that was his only contribution as the game ended in a draw.

This was Socrates first and last match for Garforth. Club owner Simon Clifford explains why that was the case:

“We drew the game he played when he came on as a sub and I decided not to play him in the next game because his warm-up had consisted of drinking two bottles of Budweiser and three cigarettes which we had in the changing rooms. I didn’t think it was a good idea for him to carry on playing too much more though he was keen to.”

Perhaps Socrates should have heeded his own words. The comic and the tragic lie inseparably close, like light and shadow. Or was it the Greek philosopher?