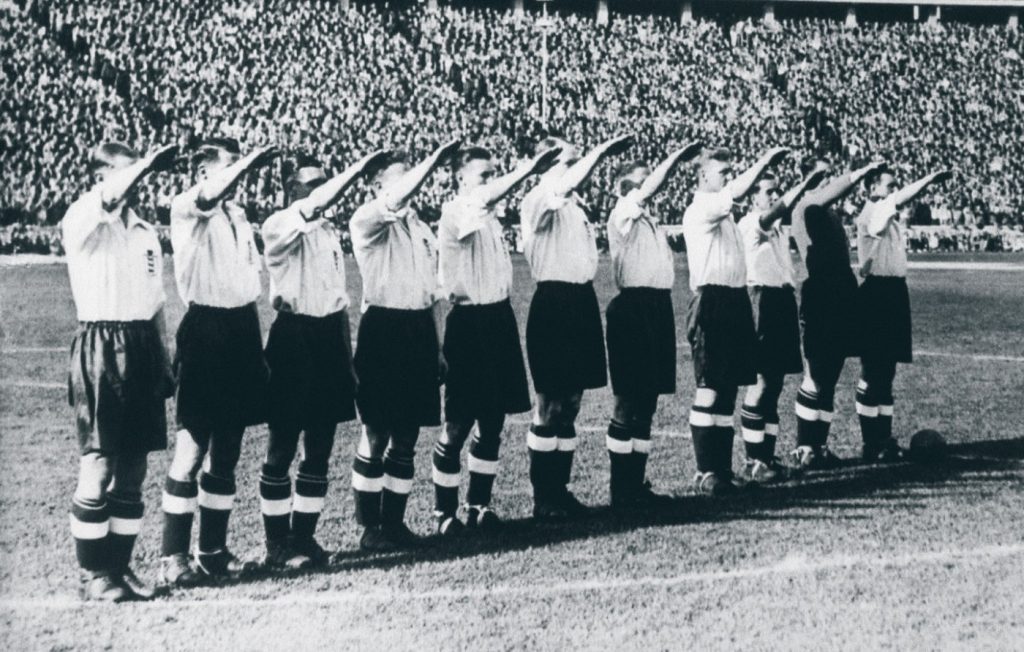 On this day in 1938, England impressively beat Germany 6-3 at Berlin’s Olympic Stadium. But the match is perhaps best remembered for an entirely different reason.

With 110,000 fans present inside the stadium, the England players were told by a Football Association official to do the infamous ‘Nazi salute’ during the playing of the German national anthem.

“The dressing room erupted. There was bedlam. All the England players were livid and totally opposed to this, myself included,” said Stanley Matthews.

“Everyone was shouting at once. Eddie Hapgood, normally a respected and devoted captain, wagged his finger at the official and told him what he could do with his Nazi salute, which involved putting it where the sun doesn’t shine.”

The British government insisted that the players performed the salute because of the palpable political tension with Germany. The official from the FA returned to the dressing room with new orders directly from Britain’s ambassador to Germany Sir Neville Henderson.

“Henderson informed them that the political relationship between England and Germany at the time was so sensitive that failure to show deference could be the ‘spark to set Europe alight’.”

The England Xi had two choices, do the salute or start a war. They chose the former but made up for it with an impressive 6-3 hammering of Germany as Hermann Goring and Joseph Goebbels watched from the stands.

The game also featured a goal from West Ham United legend Len Goulden that Stanley Matthews described as the greatest goal he had ever seen.

Len met the ball on the run; without surrendering any pace, his left leg cocked back like the trigger of a gun, snapped forward and he met the ball full face on the volley,” recalled Matthews.

“To use modern parlance, his shot was like an Exocet missile. The German goalkeeper may well have seen it coming, but he could do absolutely nothing about it. From 25 yards, the ball screamed into the roof of the net with such power, that the netting was ripped from two of the pegs, by which it was tied to the crossbar.”

Just over a year later, Europe was at war again and England faced Germany not on a football pitch but on the battlefields.