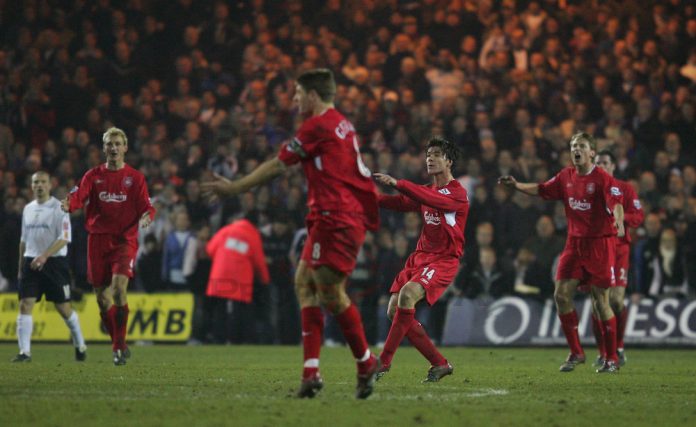 On this day in 2006, Liverpool midfielder Xabi Alonso scored a goal from 65-yards out to secure a 5-3 win against Luton Town.

The reigning European champions travelled to Kenilworth Road for an FA Cup third round tie and took the lead through Steven Gerrard in the 16th minute. The Reds were in incredible form after ending a 10-match winning streak with a draw against Bolton prior to this game. Meanwhile, Luton were languishing in mid-table in the Championship.

The home side did not let that deter their spirit, however, as goals from Steve Howard and Steve Robinson established a shock 2-1 lead going into the break. Luton were in for another treat as Liverpool goalkeeper Scott Carson brought down Rowan Vine inside the box resulting in a penalty. Club captain Kevin Nicholls converted the spot kick to make it 3-1 to Luton in the 53rd minute.

Liverpool grew into the game as it progressed and substitute Florent Sinama Pongolle scored a brace and Xabi Alonso scored one inside 12 minutes to make it 4-3.

Alonso ended the game with a flourish in stoppage time as he collected a rebound from a Luton corner, rounded the goalkeeper who was in Liverpool’s half, before unleashing a left footed strike that calmly slotted inside the unguarded Luton net.