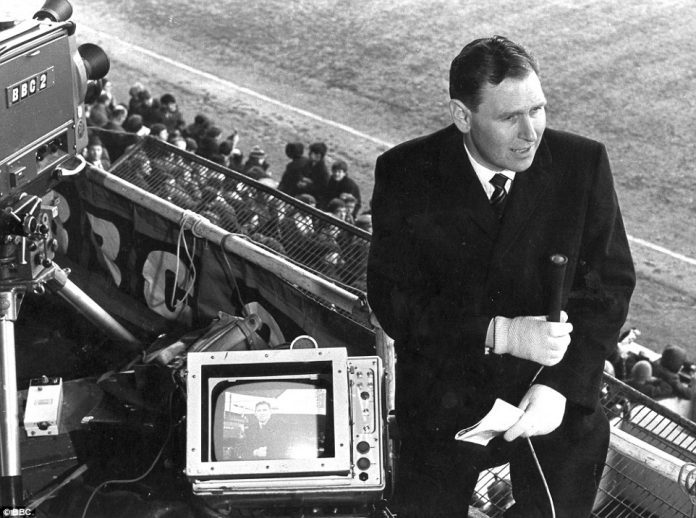 On this day in 1964, the newly formed BBC 2 televised the first airing of the show ‘Match of the Day’. An estimated audience of around 20,000 people watched the highlights of the match between Liverpool and Arsenal at Anfield.

The late great Kenneth Wolstenholme ran the commentary as the Scousers won 3-2 in a thrilling encounter. In 1965, numerous clubs tried to block the broadcasting rights of their games fearing reduced attendances on match days. But the BBC used a clever tactic to get around this dilemma. It was decided that they would not reveal which match was to be shown until after the day’s play had ended.

By the 1970s, MOTD’s popularity had soared exponentially as 12 million people were tuning in every weekend. 50 Years on and Britain’s favourite football show continues to be a major part of the country’s culture.

England were on a winning run since returning to the newly renovated Wembley. Wins against Brazil and Israel set them up for a friendly against a solid German side.

Frank Lampard opened the scoring by beating Jens Lehman at his near post. At the other end of the pitch, Paul Robinson made a mess of a cross from Bernd Schneider allowing Kevin Kuranyi to tap in Germany’s equaliser.

Christian Pander added another goal for the visitors as they ran out 2-1 winners.

On this day in 1937, FC Girondins de Bordeaux or simply, Bordeaux, played their first professional league match – a 3-2 defeat against Toulouse.

Founded in 1881, the word ‘Girondins’ in the club’s name comes from a political faction that was active during the French Revolution. Originally, Bordeaux was just a gymnastics and shooting club. Football was not introduced until 1910 after club president Raymond Brand advocated its benefits. Les Girondins turned professional in 1936 after merging with another club called Girondin Guyenne Sport.

As of 2017, the club has six Ligue 1 titles, four Coupe de France trophies and one UEFA Intertoto cup to its name.