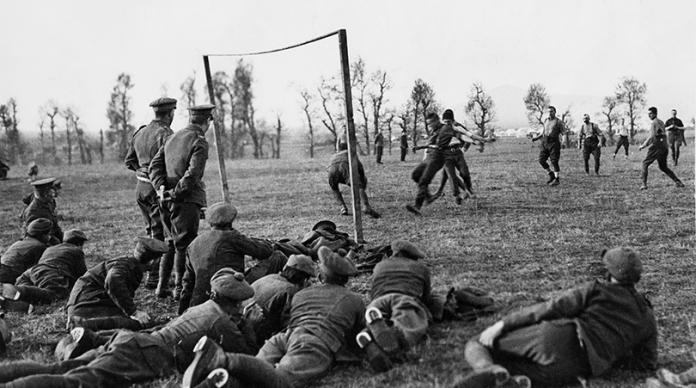 On this day in 1919, football in England returned following the end of World War I.

Britain declared war on Germany on 4th August 1914. Cricket and rugby competitions were suspended but football continued even after the outbreak of the First World War.

In fact, the Football League continued for the entirety of the 1914-15 season. Everton were winners of the First Division. Many prominent personalities of that era scorned the footballers for being “effeminate” and “cowardly” for playing sport while others were risking their lives fighting in war.

The Scottish club Heart of Midlothian had won eight successive games in the beginning of the 1914-15 season. By November 1914, each and every member of that Hearts squad had joined the British Army. This was a very significant moment in the lives of footballers during WW1 as several followed suit drawing inspiration from the brave Hearts players. Seven members of that squad never returned to Edinburgh. Duncan Currie, Harry Wattie and Ernie Ellis were killed on the first day of the Battle of Somme. Paddy Crossan, a 22-year-old defender, was hit by shrapnel on his leg and was labelled for amputation. A German POW was supposed to perform the operation but Crossan pleaded with him and his legs were saved. After returning to Britain for recovery, he went to battle again in the Sinai and Palestine Campaign. After the war, he played six more seasons for Hearts.

The 17th Service Battalion of the Middlesex Regiment was famously called the Football Battalion because of the number of professional footballers in its ranks, including the legendary Heart of Midlothian squad. The former Manchester United, Birmingham and Derby defender Frank Buckley was the first to join the Football Battalion.

The regiment boasted around 600 men at one point but not all of them were footballers. The battalion was mostly made up of fans who wanted to share a trench with their heroes. It is generally believed that about 122 professional players had joined in.