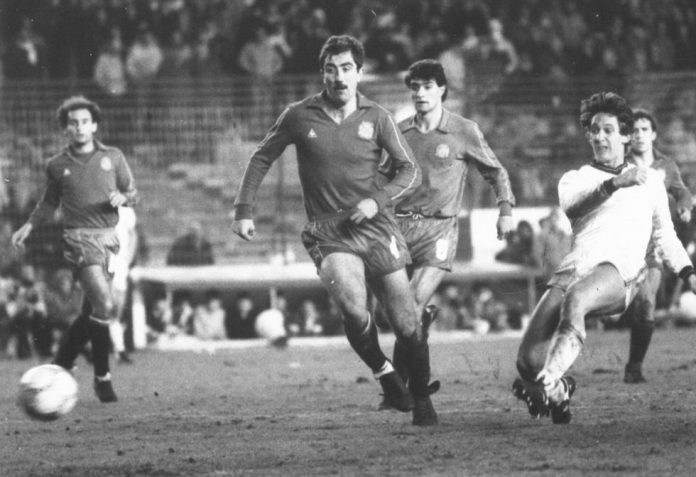 On this day in 1882, Ireland played their first ever international game of football. Unfortunately, it was a 13-0 hammering by the English.

The game took place at Bloomfield Park in Belfast two years after the formation of the Irish Football Association. Ireland became the fourth country after England, Scotland and Wales to field an international side. The Irish starting XI included 15-year-old Samuel Johnston who held the record for being the youngest international debutant in the world until it was broken by Uruguay’s Aníbal Zapicán Falcao in 1908.

England opened the scoring through Howard Vaughton who went on to score five in the game. Arthur Brown scored four, James Brown scored a brace, Charlie Bambridge and Harry Cursham scored one each.

Ireland played Wales a week later and lost that game 1-7 at the Racecourse Ground in Wrexham. Johnston became the youngest international goal scorer for his solitary effort.

On this day in 1987, England beat Spain 4-2 at the Santiago Bernabeu courtesy of a four-goal haul from Gary Lineker.

It was England manager Sir Bobby Robson’s 54th birthday and the former Barcelona and Newcastle United manager could not have hoped for a better gift. Robson also handed a young Tony Adams his international debut in the match.

Spain took the lead in the 14th minute through their star striker, Real Madrid’s Emilio Butragueno. But Lineker scored in the 23rd and 27th minute to establish a 2-1 lead for England at half-time. The Barcelona forward added two more in the 47th and 57th minute to stun the home crowd at the Santiago Bernabeu. Ramon Vazquez pulled a goal back for Spain in the 76th minute but England held on to their lead and won the game 4-2.