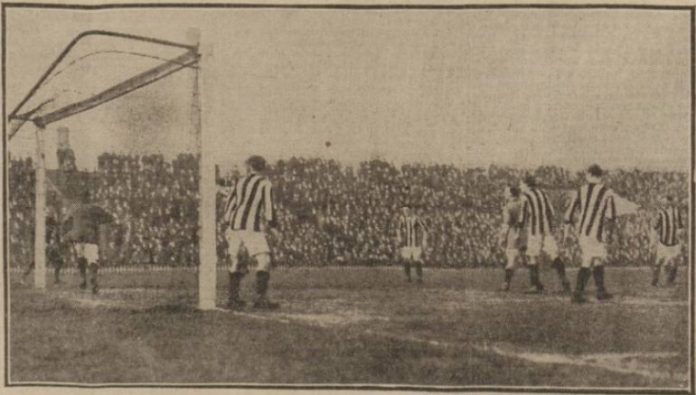 On this day in 1915, three players from Manchester United and seven from Liverpool were handed lifetime bans by the Football Association for their involvement in a match fixing scandal.

The match in question took place in the previous season earlier that year. On 2 April, which happened to be Good Friday, United hosted Liverpool at Old Trafford for a First Division fixture. The Mancunians were fighting for survival while the Merseysiders sat in mid table. More than 18,000 fans graced the stands at Old Trafford as the two great rivals went toe to toe.

But something was amiss. United took an early lead through George Anderson but the Liverpool players barely showed any signs of concern. The home side won a penalty a while later. Centre back and captain Patrick O’Connell stepped up to double his side’s lead but the shot was so far wide, it nearly hit the corner flag, according to some match reports.

“From all reports, he walked back up the pitch laughing as he thought ‘well it doesn’t matter, we can get another goal whenever we want one’,” says sports writer Graham Sharpe.

Anderson scored again before the interval to put United 2-0 ahead.

There was a row between the conspirators and the players who were not part of the scheme during the half-time break, as per some reports.

Another incident that seemed strange was when Liverpool’s Fred Pagnam’s effort hit the crossbar. As soon as the shot rattled the woodwork, Pagnam was apparently rebuked by some of his teammates for trying to pull one goal back.

“A number of his teammates gestured angrily towards him. It’s almost as if there were two matches going on at once,” added Sharpe.

The match ended with a 2-0 United victory but an official inquiry into the fixture was established shortly afterwards. Later that year, Sandy Turnbull, Enoch West and Arthur Whalley of United and Tom Fairfoul, Tom Miller, Bob Purcell and Jackie Sheldon of Liverpool were given lifetime bans. Sheldon, a former Manchester United player, was later alleged to be the ring leader of the whole scheme.

With the outbreak of the First World War, the players went off to lend their hands to the war effort. Many of the culprits were later relieved of their bans in recognition of their service. Turnbull received his pardon posthumously as he was fatally wounded in the Battle of Arras in France.

Enoch West did not plead guilty and instead sued the FA for libel. As expected, he lost the case. His ban was lifted 30 years later meaning he could return to football but unfortunately for West, he was 59.