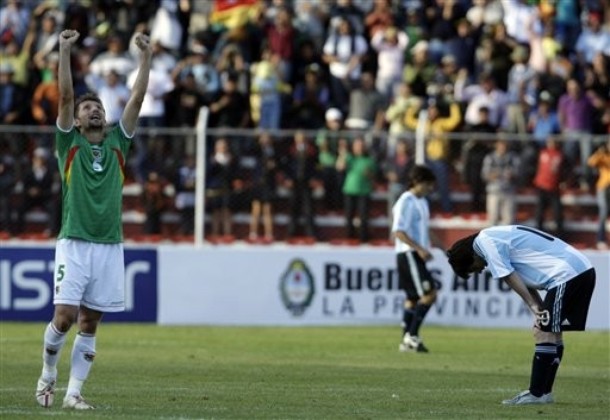 On this day in 2009, Bolivia beat Argentina 6-1 in a 2010 FIFA World Cup qualifier which matched their record loss in international football.

The Argentines had lost just one game in the CONMEBOL qualifiers, a 1-0 defeat against Chile in October the previous year. The two time World Cup winners had beaten Bolivia 3-0 on home soil the last time they met each other.

The second meeting, played at La Paz, gave us a completely different result. Being 3640 metres above sea level, the Bolivian capital has never been an easy place to play football for foreign teams. Spurred by their home advantage and their desperation for a win to keep their World Cup hopes alive, Bolivia were rewarded with a 12th minute goal from Marcelo Moreno. Argentina equalised through Lucho Gonzalez but the home side were just beginning to warm up.

A hat-trick from Joaquin Botero and goals from Alex da Rosa and Didi Torrico made it 6-1 as the Lionel Messi led Argentina were left humiliated.

This defeat matched their record loss of 6-1 against Czechoslovakia in 1958. It was matched again by Spain in a friendly in Madrid in 2018.