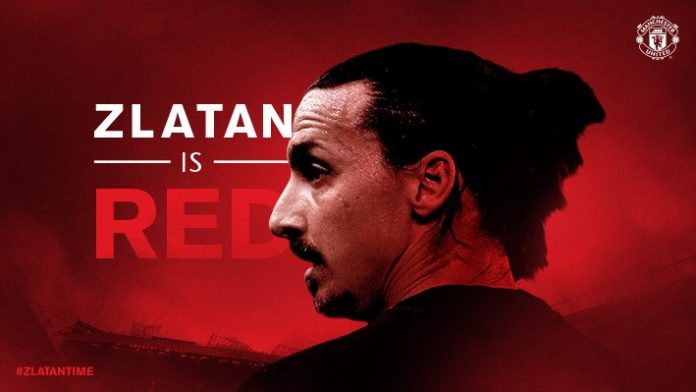 Manchester United have officially announced the signing of the Swedish superstar Zlatan Ibrahimovic.

The 34 year old striker’s contract with Paris Saint-Germain expired yesterday and he confirmed his move to Old Trafford on Twitter.

The Premier League giants have now officially unveiled him and the player has signed a one year deal with them.

The PSG striker has won the league in every country he has played in and will want to do the same in England now. He scored 50 goals with the French champions last season and will be a tremendous upgrade on the likes of Rooney, Martial and Rashford.

The player has worked with Mourinho before and the pair were looking forward to a reunion.

Ibrahimović has won trophies in every country he has played in – France, Italy, Holland, Spain. The 34 year old made 180 appearances for the French champions Paris Saint-Germain and racked up a remarkable tally of 156 goals.

After winning championships in four different leagues, the Sweden star will now try his luck in England.

Speaking to the Manchester United media about the transfer, Zlatan said: “I am absolutely delighted to be joining Manchester United and am looking forward to playing in the Premier League. It goes without saying that I cannot wait to work with Jose Mourinho once again. He is a fantastic manager and I am ready for this new and exciting challenge. I have thoroughly enjoyed my career so far and have some great memories. I am now ready to create more special memories in England.”

Mourinho also expressed his delight and claimed: “Zlatan needs no introduction. The statistics speak for themselves. Ibra is one of the best strikers in the world and a player who always gives 100 per cent. He has won the most important league championships in the world of football, now he has the opportunity to play in the best league in the world and I know he will grasp this opportunity and will work hard to help the team win titles. I am certain that his talent will delight fans at Old Trafford next season and that his experience will be invaluable in helping to develop the younger players in the squad.”