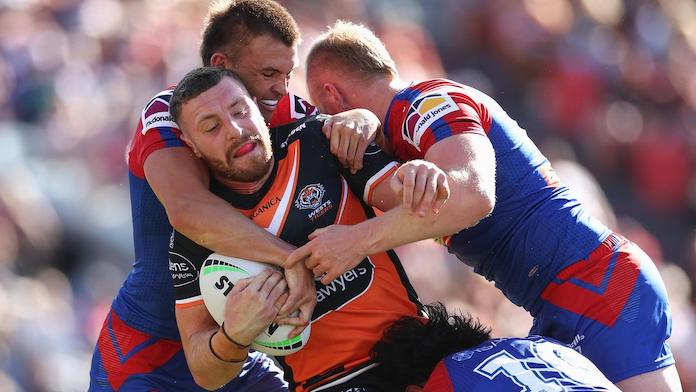 It’s nearly time for round 3 of the NRL season, and there are some mouthwatering clashes for fans to savour. There’s an all-Sydney affair between the Rabbitohs and Roosters, while elsewhere, the Panthers and the Knights, both undefeated this season, go head to head.

But what NRL bets should you be making this week? To find out, check out our NRL betting tips and predictions below.

There’s a derby to kick off the action this week, with the Dragons coming up against the Sharks at WIN Stadium. Cronulla have won the last four matches between the two sides, but the Dragons will be on a high after their last-gasp win against the Eels.

This match-up looks set to be a close one. However, we favour the Dragons, who are underdogs but represent great value for a win. You’ll be able to back them at 2.25 with BlueBet.

It’s not been a great start to the season for either the Tigers or the Warriors. Judging by what we’ve seen so far, fans of both teams are in for a long and potentially depressing season. However, one team will finally get off the mark this week.

The Warriors are missing key players from their line-up, including Shaun Johnson, injured in last week’s encounter with St George. Despite being depleted, we still expect them to get the job done against the Tigers. You can back them at 1.75 with BlueBet.

The Rabbitohs have started off poorly, losing their opening two encounters – including the last match against the Storm, which ended in the most insane manner. The Roosters have done slightly better, easing past the Sea Eagles last week to earn their first win.

The Rabbitohs have dominated this fixture recently, winning the previous three – two of which they won by 40+ points. However, we’re backing the Roosters to break the streak and take a closely fought contest. You can back them at 1.56 with BlueBet.

Both teams go into this match undefeated for the season. The strong start from the Panthers was expected, but the Knights have been something of a surprise, notching up convincing wins over the Roosters and Tigers.

The Panthers are the strong favourites for this match, and it’s really no surprise. We think that they’ll easily beat the Knights and you can get odds of 1.18 at BlueBet. Maybe a handicap might be better though – BlueBet have the Panthers at -13.5 with odds of 1.82.

The Storm come into this game 2-0, although there have been a couple of wobbles, most noticeably against the Rabbitohs. The Eels, meanwhile, are 1-1, after losing late in the game to the Sharks last week.

The Raiders looked poor in their loss to the Cowboys last week, but the Titans fared much better, mounting a second half charge to despatch the Warriors. The last meeting between the two sides in the capital ended with a thumping 44-6 win by the Titans.

A quick look at the two teams shows that the Titans undeniably have the stronger squad of the two, plus they also seem to have more belief – something sorely lacking from the Raiders players last week. We back the Titans to win at odds of 2.20 with BlueBet.

This looks like being a fantastic match between two teams who looked good last season. The Broncos overcame the Bulldogs last week, while the Cowboys had a decent win against the Raiders.

The Cowboys have won three out of four of the recent matches between the two, but the Broncos came out on top last time they met, cruising to a 37-18 victory. The Broncos are favourites, but we think the price on the Cowboys is great. Back them at 2.45 with BlueBet.

After a decent 2021 season, Manly have disappointed in their first two matches of 2022, losing to the Panthers and the Roosters. The Bulldogs were were pretty terrible last season, but this year have started 1-1, with their most recent game being a loss to the Broncos.

Manly have won the previous six encounters between these two teams, but that doesn’t guarantee them a win. However, we do think the Sea Eagles will triumph, albeit by a smaller margin than many might expect. Back them at 1.28 with BlueBet.