NFL fans can claim a $1,000 deposit bonus signing up to BetOnline to wager on NFL-UK: Falcons vs Jets!

Sunday will see the first of two scheduled NFL-UK games as the Atlanta Falcons take on the New York Jets at the beautiful Tottenham Hotspur Stadium in London, England. Both teams are 1-3 heading into this crunch NFC vs AFC encounter, so UK fans can expect a tough, hard-hitting event.

Below are the latest NFL betting lines & odds for Sunday’s big, cross-Atlantic game at the BetOnline sportsbook:

Bet on Falcons vs Jets at BetOnline

BetOnline is offering a 50% first-time matched deposit bonus that’s worth up to $1,000 to anybody joining the sportsbook in time for NFL-UK in London on Sunday.

To claim a 50% deposit bonus when you sign up to wager on Falcons vs Jets, just follow the steps listed below:

The Jets’ new QB and No.2 overall pick at the 2021 NFL Draft, Zach Wilson, finally came alive vs the Tenessee Titans last week, finishing the game with 297-yards, two TDs, and a highlight reel of great passes.

To beat the Falcons, the Jets (1-3) will need their rookie superstar to be on top form once again, especially with WRs Denzel Mims and Elijah Moore doubts for the game. The return of veteran receiver Jamison Crowder from injury should ease any significant worries about the Jets ability to compete for offensive catches, however: Crowder went for 61-yards and a TD vs Tenessee and will be a fine foil for Corey Davis – who has been on fire this season – and Keelan Cole should Mims and Moore miss out.

Ranked 27th in passing yards and 29th in rushing yards, the Jets aren’t exactly a team that piles on the points at present. But, the huge win vs the Titans last weekend will give them belief and the Falcons more than just a little cause for concern, especially since the Jets defense continues to play well, particularly in coverage.

For Atlanta, last weekend brought with it another defeat, this time at the hands of Washington in a game they lost 30-34. The Falcons offense, led by the effervescent Matt Ryan at QB, put up big yards through the air. But the defense struggled to get pressure on the opposition QB, and failed to make plays on crucial downs late in the game as the Falcons slipped to 1-3 in the super-competitive NFC South.

There are still plenty of positives for Arthur Smith’s team, however: Calvin Ridley is doing a fine job of replacing Julio Jones (Titans) and has already amassed 255-yards in four games this year. And, former Chicago Bears utility back Cordarrelle Patterson continues to impress as a full-time, dual-threat running back. Patterson chalked up 116-yards from scrimmage and three TDs vs Washington and will be a player that the Jets need to keep an eye on. 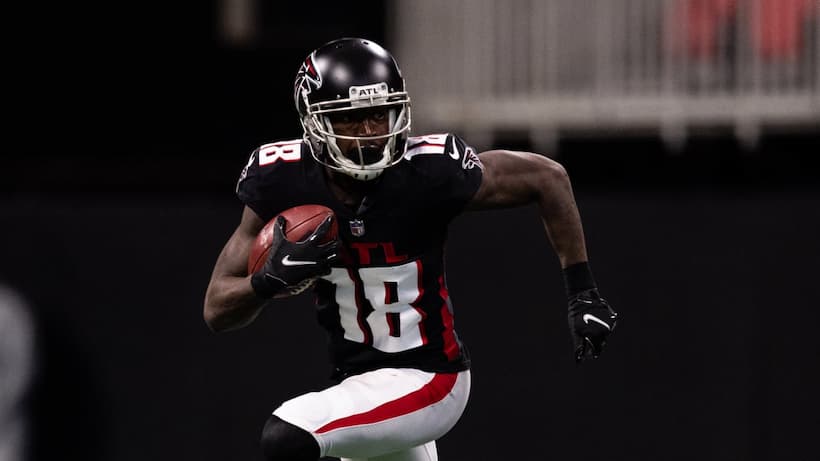 The Falcons travel to London without too many causes for concern with respect to injuries. WR Calvin Ridley is questionable for as-yet unknown reasons after skipping practice on Thursday. His WR partner Russell Gage is also a doubt for the weekend with an ankle injury. On the defensive side of the football, S Erik Harris (calf) and second-string RDE Marlon Davidson are both listed as questionable for the trip.

As for the Jets, Denzel Mims was sent home from practice yesterday with a non-COVID-related illness and is unlikely to make the trip to the UK this evening. Fellow WR, the rookie Elijah Moore is expected to feature not much if at all after suffering a concussion last week. TE Tyler croft is also a doubt for coach Robert Saleh’s new-look offense. On defense, there are issues at WLB for the Jets, with both Hamsah Nasrilideen and Blake Cashman set for extended stints on IR.

On paper, the Atlanta Falcons certainly boast the more experienced and talented offense of these two teams. Form, however, is a big deal in the NFL, and the win that Zach Wilson and co. eeked out vs the Titans last week, plus the return to fitness of Jamison Crowder and the continued excellence of Corey Davis (257-yards; 3 TDs), just about gives the Jets an edge in what will be a difficult game on the road for both teams.

It’s London and anything can happen. So we’re backing the underdog Jets to keep their good form going at the Falcons’ expense.