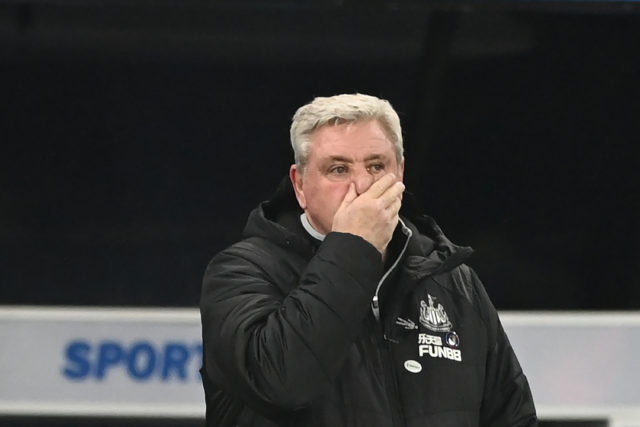 Newcastle United slipped to their 10th Premier League defeat in 14 games at the hands of Manchester United at Old Trafford last night, and they are now at risk of relegation with Fulham breathing down their neck.

The Magpies lost just four of their opening 11 league games this season, but things have gone south and fans are now calling for the head of boss Steve Bruce with a drop to the Championship looming.

Newcastle owner and chairman Mike Ashley does not appear to be bothered, and the businessman is actually not thinking of the St James’ Park outfit at the moment.

According to The Telegraph’s Luke Edwards, the club are not considering a change in the dugout right now and Ashley remains hands-off regarding the decision-making at SJP.

Newcastle are not high on his list of business priorities at the moment, and that revelation has riled up the fans.

Selling the club remains a top priority to the Magpies owner, and he just wants out as soon as possible.

Relegation could wipe more than 50% off the market value of Newcastle, and Ashley has to act fast if he still wants to get £300 million from the sale of the club after the end of this season.

Keeping Bruce in charge could prove harmful to the Magpies’ chances of staying up as his methods are clearly not working, and Newcastle fans have taken to Twitter to react after hearing that Ashley is not looking to show him the exit just yet.

Genuine question Luke, where is Charnley? He seems to be missing. Has there been any engagement with him?

I’m curious what the decision making process is here though. I’m *assuming* that Charnley doesn’t have delegated authority to make such a decision without Ashley’s approval?

They will never, ever learn 🤦🏻‍♂️

Relegation it is then #BruceOut

Why am I not surprised championship here we come

Will the club stick with Bruce in the championship Luke? (Just got to accept our fate unfortunately so no need to pretend we have a future in the PL)

So who at the club is actually making the football decisions then?

With 13 games to go and some tough fixtures on their hands, every dropped point going forward could prove very costly, and it will be interesting to see where Newcastle are playing next season.

Not many fans will be surprised if that is not in the Premier League.

Ashley would have to part with a seven-figure sum if Newcastle were to change manager now, and he is clearly not keen on parting with any compensation money right now.

In other news, here is how Alan Shearer reacted to Fulham’s victory at the weekend as Newcastle edged closer to relegation.