Newcastle United fans received a late Christmas present on January 2nd this year, when what they really was delivered; Alan Pardew had left Tyneside and was confirmed as Crystal Palace manager.

The majority of the St James’ Park faithful were jubilant that a coach that they had never wanted in the first place, who they felt was underachieving, was no longer at the club.

However, fast forward a couple of months and the Pardew Out campaign now seems decidedly short-sighted.

While the Palace boss has lifted the London club out of relegation danger to a position where they have seven points more that Newcastle, the Tyneside outfit have lost their last seven consecutive games and all of a sudden are not guaranteed their top-flight status.

After a 3-2 home defeat to Swansea yesterday, the Geordies are no closer to assuring their place amongst English football’s elite for 2015-16, with the club stuck on 35 points for what will feel like an eternity for the fans.

Meanwhile, as Newcastle struggle to stop the rot, teams below them are fighting for their lives and closing the deficit.

Leicester have won four games on the bounce to lift them to 31 points, Aston Villa have been revitalised since Tim Sherwood’s appointment and Sunderland beat Newcastle in the Tyne Wear derby. 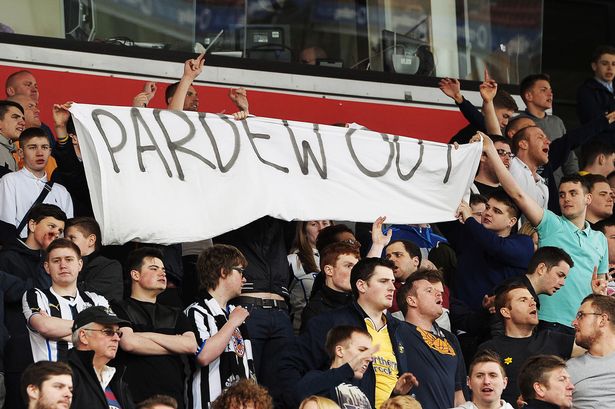 Hull, Leicester and Sunderland all have a game in hand over John Carver’s side also, meaning that the current five-point buffer that Newcastle possess could be trimmed further.

If the Tyneside club were to continue their abhorrent run of form and somehow be demoted to The Championship, it would represent one of the biggest capitulations in top flight football in the modern era.

On paper the Geordies will single out home fixtures against West Ham and West Brom as the games they can get the points to confirm their safety. Away games at Leicester and QPR will not be comfortable for the visitors.

Regardless of where Newcastle finish up this season, the team’s recent performances show two things.

Firstly, the state of affairs at St James’ Park is a complete shambles both on and off the pitch, with the fans having every right to demonstrate against Mike Ashley’s ownership of the club.

While other Premier League sides have invested heavily in new players in a bid to reach their goals, Ashley seems happy to make a profit from the squad as long as Newcastle stay in the top flight.

A summer of upheaval is desperately needed, with a financial commitment from the club’s owner necessary if the Tyneside outfit are to avoid a relegation dogfight next term (assuming they avoid the axe this year).

Secondly, although Pardew was not a popular figure in the North East, his achievements deserve to be commended.

Leading the club to a run of victories earlier this season has been the only saving grace for Newcastle in 2014-15, while the Geordies can now only dream of finishing in the lofty fifth place that Pardew led them to three seasons ago.

With a new managerial appointment critical this summer, the incumbent has one of the toughest jobs in English football to take on and will struggle to replicate the achievements of Pardew over four years.