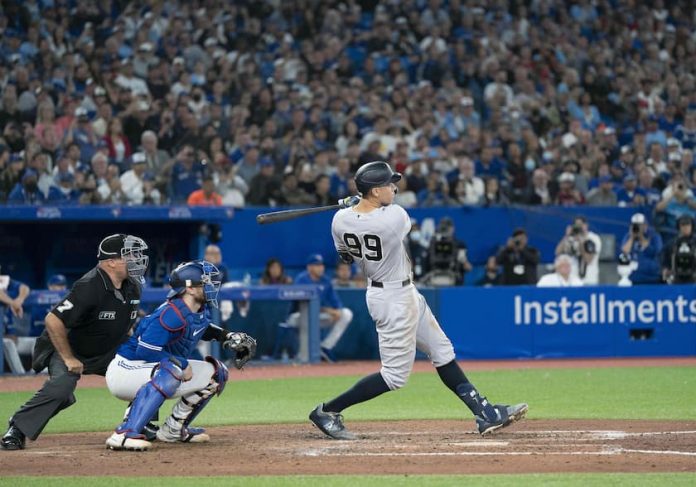 Aaron Judge finally ended his home run drought smashing one out the field in the Yankees 8-3 victory over the Toronto Blue Jays on Wednesday night.

Judge has been working towards the legendary Roger Maris’s longstanding American League record of 61 home runs all season. However, the 30-year-old was stuck at 60 runs for the past seven games after failing to hit a home run in any.

In the seventh inning of last night’s game Judge sent a ball deep over the wall to tie Roger Maris’s record which had stood since 1961 and take a 5-3 lead over the Blue Jays.

In an on-field postgame interview Judge revealed his emotions following his achievement: “It was pretty cool. I wasn’t expecting it, seeing the love from my teammates, I do what I do for them. And to do it in a win, it’s tough to describe right now.

“I was just trying to go up there, start a rally and get something going. It’s an incredible honor, a lot of emotions and it took me a little longer than I wanted it to.

“I’m nothing without my family, they mean the world to me, the reason why I am here and the reason that I am who I am.

“I gave a nod to Roger Maris Jr, it means a lot that he showed up here. I love these moments, a moment like that, those are the moments you look for.”

Roger Maris Jr. was also in attendance in Toronto to witness his father’s record finally be broken. He had also attended the games during New York’s last home stand when Judge had failed to hit the record-breaking longball.