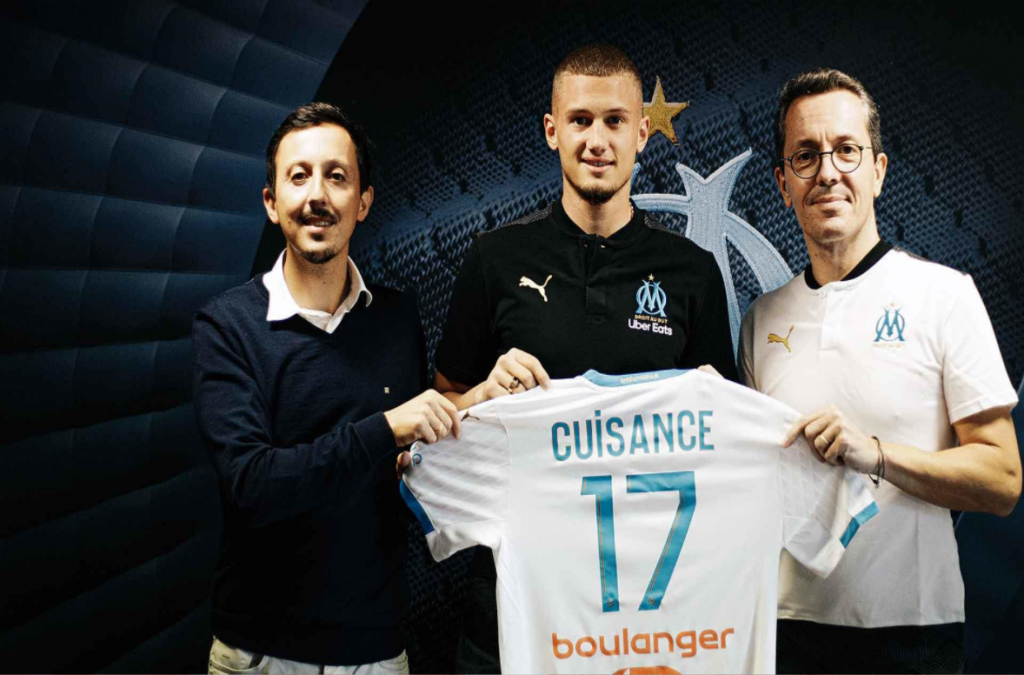 With only 302 minutes across 9 league games last campaign, Cuisance has been agitating for more first-team football.
That door has been opened, with a deadline day loan with an option to buy to Marseille. Cuisance has endured an underwhelming last 3 months, without a true breakthrough at either Gladbach or Bayern. Aggravated with the modest role he was offered at both German clubs, Marseille will offer a platform for him to showcase his talent on a more routine basis.
Cuisance is still a raw talent, however, he has shown in spurts in his first two seasons in the Bundesliga why he is capable of becoming a long term fixture in the French national team as well as amongst Europe’s elite midfielders.

Cuisance possesses a playstyle reminiscent of his former Spanish teammate Thiago. There is a large emphasis on progressive passes through or over top opposition back lines, and a sublime first touch and technique that allows him to run with the ball through opponent’s midfield with ease.

Cuisance’s first thought is always to look for the ball forwards that will directly lead to a goal-scoring opportunity. He is capable of changing directions with the drop of a shoulder or picking out a run of a winger exploiting an opposition defender who has momentarily switched off. At 1.81m, Cuisance is a robust and agile player, who is able to hold his own defensively, however, this is still a facet of his game that needs to improve.

He is also a threat in the final third, showcased in his long-range stunner vs VFL Wolfsburg on the final Matchday last season. Cuisance is always looking for an angle to shoot or slide in a forward, and requires opposition midfielders to always be aware of his presence should the ball fall to his feet unmarked in their final third.

With a technical and tactical profile befitting of an elite midfielder, there isn’t much that hinders Cuisance from progressing into one of the best deep-lying playmakers in Ligue 1. However, in order to get the most out of his talent best, Cuisance must develop a far better balance to his game and improve on his decision-making.

Far too often, Cuisance is unable to gauge when to try a risky pass or when it’s best to recycle possession and look for a new angle to approach an opposition. This can cause him to cheaply give the ball away and allow the opposition to release the pressure mounted upon them. This trait was compounded by his lack of playing time and desire to prove his ability each time he stepped onto the pitch, however, it came across as impatient and inexperienced play, that doesn’t breathe the calmness and composure required of a top class midfielder.

Cuisance is undoubtedly talented and has all the tools necessary to reach the top. Although still inexperienced at the highest level, the ability the young Frenchman possesses is clear to see. With vertical ball progression and dynamic dribbling reminiscent of Thiago, Cuisance’s potential is enormous. With a better understanding of when to try a risky pass, and when to recycle possession and look for new ways to breach oppositions defensive lines, Cuisance will be capable of making the next step at OM, in a side that he is hoping will finally provide him with routine first-team football.

To read more of my work, please follow me on Twitter @lengesaa
Join our Telegram channel to stay up to date on the latest in marketing