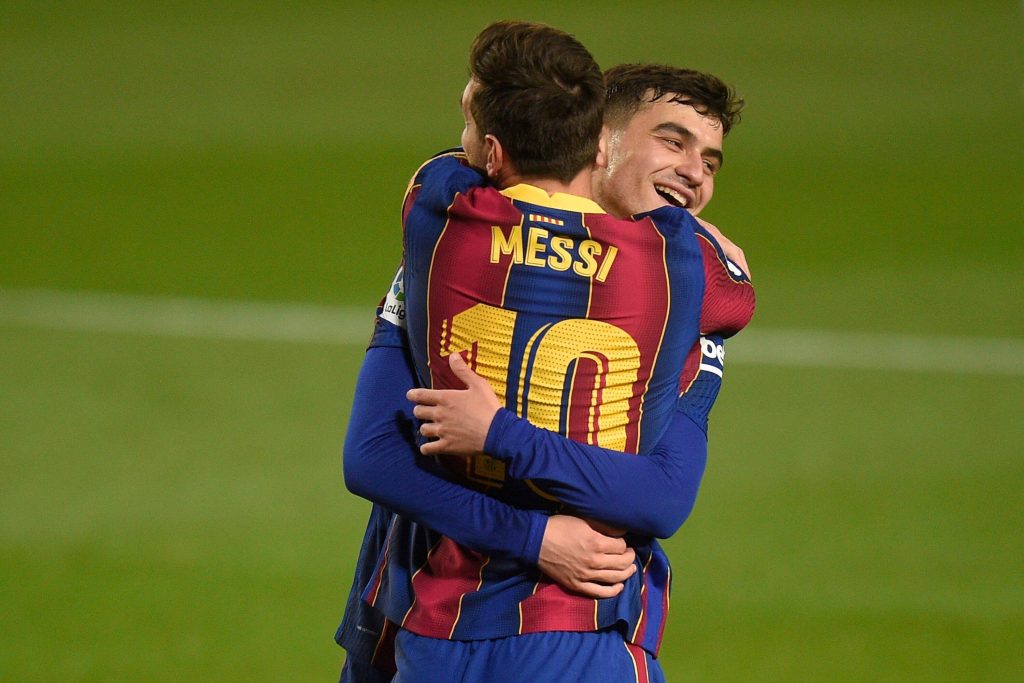 It was a lively start from the home side, who came within inches of opening the scoring in the third minute.

Lionel Messi struck from just outside the box, seeing his near-perfect shot crash back off the underside of the crossbar.

But it was not long before the Argentine was on the scoresheet. Sergio Busquets found him with a brilliant through ball, and he found the far corner via David Soria’s glove.

However, Barca’s lead did not last long. La Masia graduate Marc Cucurella whipped in a low cross towards Angel.

The striker deflected the cross onto the body of Clement Lenglet, who diverted the ball into his own net.

In the 28th minute, Getafe returned the favour, putting La Blaugrana back in front in comical fashion.

Under no pressure, Sofian Chakla attempted to play back to Soria but miscalculated his pass and found the bottom corner.

Five minutes later, Messi added another to his tally. His right-footed volley was turned onto the post by Soria, but he managed to follow up and tap in from a tight angle.

This was his 25th La Liga goal of the season, equalling his tally from the last league campaign.

The second half started in tamer fashion, with neither side coming close to adding to the scoreline in the first 20 minutes.

But this would change soon after VAR awarded Getafe a penalty when Ronald Araujo caught Eres Unal with his right foot. The Turkey international stepped up and coolly rolled his penalty into the bottom left corner.

With their lead now just one goal, Ronald Koeman’s men began to look nervy, especially up front. Messi fed both Ilaix Moriba and Francisco Trincao, but both attempted to pass when perhaps they were better placed to shoot.

The six-time Ballon d’Or winner eventually managed to bag himself an assist, putting the game to bed in the process.

Araujo made amends for his earlier mistake, guiding a header into the back of the net from Messi’s corner to make it 4-2.

Messi would get his chance to complete his first hat-trick of the season after Chakla brought down Antoine Griezmann. However, the 33-year-old unselfishly let Griezmann take the penalty, bagging his ninth goal of the season.

The game finished 5-2 – a scoreline that perhaps flattered Koeman’s side a little. Barcelona move five points off the top with a game in hand, while Getafe remain just four points above the relegation zone.

It’s near impossible to put into words just how good Lionel Messi is, but we’ll have to try.

The forward was in inspirational form once again, instantly making his mark on the game with an explosive opening ten minutes.

He was desperately unlucky to see one thunderous strike hit the crossbar but made sure he was not denied a second time just a few minutes later.

He soon added a second to his tally before half time, putting him four clear of Karim Benzema in the Pichichi race. This comes after the Real Madrid forward bagged himself a brace against Cadiz the night before.

Even in the second half, when Barcelona were looking less threatening, Messi was the driving force behind every attack.

He will have felt disappointed in some of his teammates for not converting the chances that he had created for them.

He was not to be denied a ninth assist of the season, putting one on a plate for Araujo from a corner. This takes him one off the top of the La Liga assist charts.

If he can pull ahead in that department, he will lead the league for both goals AND assists in his fourth successive season.

And when he was given a golden chance to score his hat-trick, he allowed Griezmann to net from the spot.

Just another day at the office for Lionel Messi.

The situation for Barcelona is simple – if they win each of their last seven games of the season, they win the La Liga title. Given how poor their first half of the campaign was, this is a good position to be in.

In 2021, they’ve been nothing short of excellent in the league, picking up 43 points from 16 games. Combined with Atletico Madrid’s severe drop in form, they have managed to close a 12-point gap down to just five with a game in hand.

Barcelona’s form in recent weeks has been somewhat inconsistent. They were brilliant in the Copa del Rey final against Athletic Bilbao and in the 6-1 thrashing of Real Sociedad.

However, the performance tonight was not so hot despite the scoreline, and neither were the outings against Real Madrid or Real Valladolid.

Meanwhile, Atletico Madrid are starting to rediscover their best form, even in the absence of top scorer Luis Suarez. Diego Simeone’s men have won their last two games, scoring seven goals without conceding.

It’s not long until the two meet at Camp Nou on May 8. Before then, Barcelona face Villarreal, Granada, and Valencia, while Atletico Madrid clash with Athletic Bilbao and Elche. This is shaping up to be one of the most exciting games of the season.

Not to mention, Real Madrid are still very much in the mix, while Sevilla have crawled under the radar and found themselves just six points off the summit. We could be in for a fascinating ending.