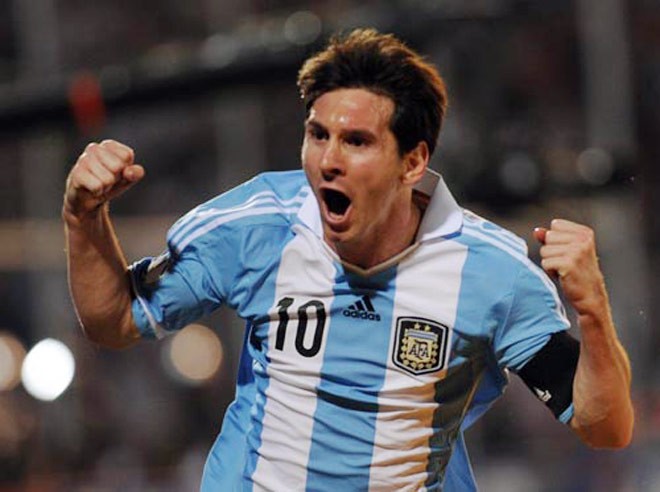 Up high in the sky, towering above the heavens next to Mount Olympus, lies the Mount Rushmore of football. So far, only two faces have been carved into the mountain, that of Argentina’s Diego Maradona and Brazil’s Pele. In between the two immortals, lies an empty space of rock, ready to be carved. That area is only 90 minutes away from being filled with another face, and the only thing between a new addition is Germany.

The man that the lonely sculptor waits for is Argentina’s captain Lionel Messi. Messi just guided his country to their first World Cup final in twenty four years by beating the Netherlands in their semi final match. After 120 minutes, the match was a stalemate. Unable to get past a determined Netherlands defence, Messi and his compatriots had to beat the 2010 runners up in penalties. Messi led the line and opened the penalty account for the South Americans after Sergio Romero saved Ron Vlaar’s poor attempt. Every Argentine then went on to score, and Romero again saved another penalty as he stopped Wesley Sneijder and Argentina advanced.

As Messi looks to lead his country out into the Estadio Maracana against Germany, Messi has two men to thank for advancing to the final. Javier Mascherano and Sergio Romero both stopped the ball hitting the back of the net in the later stages and penalty shoot out respectively. Mascherano’s last ditch challenge to stop Netherlands’ Arjen Robben when he skipped through the Argentine defence was a crucial point in the match as it was the best chance of the evening, and made sure Argentina’s hopes were still alive. Romero’s courageous saves in the shoot out defined histournament so far, as he has been a spider protecting the web behind him throughout.

Having scored four goals and grabbed a single assist in his 6 starts in Brazil, Messi has had the weight of his nation on his back the whole tournament. His goals in the group stage proved decisive, but he has taken on a deeper position in the knock out stages. He has tried to get on the ball more in deeper areas and carry it up field. This has given his teammates more freedom on the field and more space to occupy when in attack.

In the round of sixteen against Switzerland, Messi’s assist to Di Maria was crucial, proving to be the only goal in the game three minutes from penalties. Against Belgium in the quarter finals, he attracted players like a magnet and his pass allowed Di Maria to set up Gonzalo Higuain. Just recently against Netherlands, Messi was always swarmed and surrounded by the colour orange, but still managed to play in a few of his teammates. Against Germany though, he will look to do the same but push up more in attack as none of the German defenders who started against Brazil in the form of Phillip Lahm, Jerome Boateng, Mats Hummels and Benedikt Howedes can match him for speed and should be left in his dust.

Germany head coach Joachim Loew worst nightmare would have had to have been to face Lionel Messi in the final. Having always been told that he needs the World Cup to be the greatest, Messi is so close to glory that his breath is fogging up the trophy. Whether Germany try to man mark Messi out of the game or treat him like an ordinary player, he will hurt Germany and will not waste his chance to be a legend of the game and finally step out of the shadow of the Hand of God.