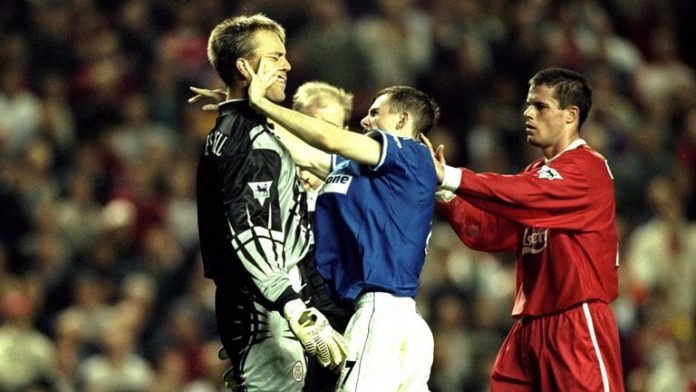 Everton might have won their last three matches across all competitions but the sternest of tests awaits Sam Allardyce and his men when they visit Anfield on Sunday to face Liverpool for the highly anticipated Merseyside Derby.

So ahead of this epic clash between the two sides, we take a look at the five best Premier League matches between Liverpool and Everton.

The Everton attack was led by Romelu Lukaku, Ross Barkley and Kevin Mirallas while the Reds boasted the deadly Luis Suarez up front who was augmented by Philippe Coutinho and Steven Gerrard. Coutinho and Suarez scored either side of a Mirallas goal before Lukaku scored a brace to put Everton in front.

But substitute Daniel Sturridge equalised in the 89th minute to salvage a point for Brendan Rodgers’ men.

The Toffees had made a great start to the 2006/07 season and their form continued as they smashed Liverpool 3-0 at Goodison Park.

Tim Cahill put the home side up front after 23 minutes with a close range effort before Andrew Johnson capitalised on a Jamie Carragher mistake to double Everton’s lead 12 minutes later. Liverpool came knocking on Everton’s goal throughout the game but Tim Howard made a string of quality saves to hold on to his side’s two goal advantage. The cherry on the cake was added in the dying moments of the game as Johnson scored his second to complete a memorable rout.

Steven Gerrard, Francis Jeffers and Sander Westerveld are sent off as Everton record a famous league victory at Anfield.

Kevin Campbell slotted home the only goal of the match after just four minutes to frustrate the Kop faithful. Jeffers and Westerveld were involved in a scuffle in the second half which resulted in referee Mike Riley brandishing the red card for both of them. A young Gerrard was sent off in the 90th minute for a dangerous lunge on Campbell.

Talking about ill tempered affairs, this meeting at Goodison Park had its fair share of bookings.

Sami Hyypia put the ball into his own net to put Everton ahead after 37 minutes. The score remained 1-0 at half time before Toni Hibbert was sent off for bringing down Steven Gerrard who was clear on goal. Dirk Kuyt stepped up to convert the penalty and bring the scores level in the 54th minute.

With the game heading towards a draw, Phil Neville of all people appeared to handle Lucas’ shot on goal resulting in another penalty in the 90th minute. Kuyt completed his brace as Liverpool snatched all three points from the game.

Two penalties, 12 bookings and a world class goal to clinch the winner, this is perhaps the best Merseyside Derby in the history of the Premier League.

Emile Heskey put Liverpool ahead before Everton talisman Duncan Ferguson equalised before the halftime interval. Markus Babbel restored Liverpool’s lead in the second half and a penalty opportunity presented itself to extend their advantage. But Robbie Fowler’s spot kick hit the post as Everton equalised yet again with a penalty of their own.

With four minutes added on the clock, the game appeared to be heading for a draw. But Everton’s Niclas Alexandersson fouled Gregory Vignal 44 yards from goal. Up stepped Gary McAllister to take the free kick and score a fantastic winner deep into injury time.