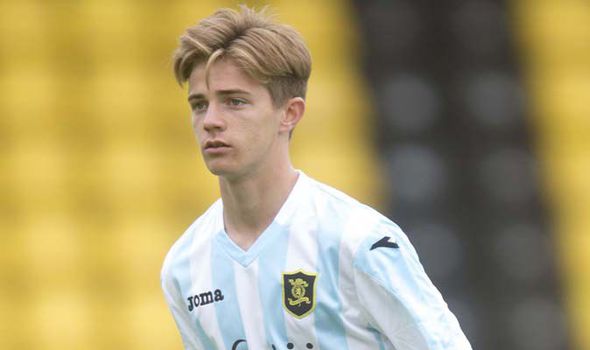 Livingston teenage striker, Matthew Knox, is to undergo a third trial at Manchester United, as the youngster closes in on a move to the Premier League.

The 17-year-old striker has caught the attention of heavyweight Premier League clubs like Liverpool, Tottenham, and Everton, and he has even appeared for trials, but it seems he is likely to be snatched up by Manchester United.

Knox, who became the youngest ever player at 16 on Boxing Day, has made seven appearances for the Scottish third tier side this season. Livingston boss, David Hopkin, has hailed him as a ‘real talent’ ahead of his make-or-break move to Manchester United.

Hopkin said, as quoted by the Daily Mail, “It’s a great honour for him to be training with the team and be invited down again. He must have done something to impress him [Mourinho] last time. He’s handled everything great here, and he’s a real talent.“

Scottish giants, Rangers FC, had shown an interest in him in the summer, and had a £75,000 bid rejected by the Scottish League One side.

In his last visit to Carrington in August, Knox had impressed the United scouts, and the Red Devils are now looking to table an improved offer, with a bid around £150,000 anticipated when the transfer window opens in January. Of course, it will only materialise if he makes a strong impression in his third attempt.

The youngster has signed a two-and-a-half-year deal with Livingston earlier this month, but the Scottish club have still allowed him to go for a trial and are unlikely to block his move.