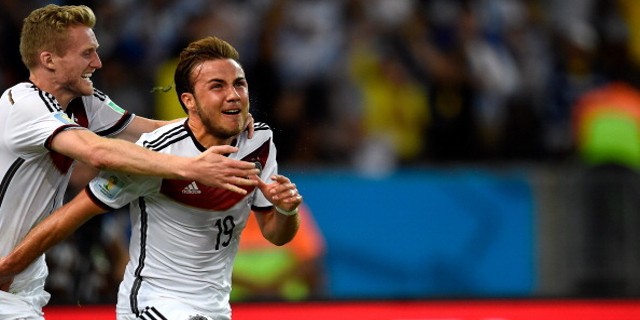 Having been dropped to the bench for previous poor performances, Mario Gotze was the last roll of the dice for German coach Joachim Low when he threw the Bayern Munich attacker on late against Argentina. Lady Luck would happen to blow on Loew’s hand as he rolled the dice, as Mario would prove the match winner for his country and a snake eyes for Argentina.

In what was a tense World Cup final, both Germany and Argentina no matter what they did could not get the back of the net to ripple in the standard 90 minutes. Both sides were blessed with chances, as Argentina were gifted a chance early in the first half only for Gonzalo Higuain to shoot wide.

Germany unluckily hit the post late in the first half through defender Benedikt Howedes off a corner and moments after the second half whistle blew Lionel Messi had a chance to score but also failed to hit the target in the tug-of-war match being played in the Estadio Maracana. By then it was clear this match, no matter how many chances were given, this match would enter extra time.

Germany were clearly missing Mario Gotze throughout the match. The former Borussia Dortmund man is a blend of an elegant play maker and methodical finisher. He can just as easily be the one to load the gun or pull the trigger. For this his substitution for Miroslav Klose made sense as he was needed, and his distinctive style came into effect when Andre Schurrle delivered the killer cross that the midfield maestro dispatched to lift his nation and down another.

After a disappointing debut season for Bayern Munich, one in which he wasn’t usually the first name on the team sheet, Mario Gotze needed a great World Cup. Before the final, Gotze’s tournament was mixed. He started off bright by winning the penalty that led to Germany’s opener against Portugal and scoring in his nation’s second match against Ghana, but like all stars he looked to have burnt out as he fell out of favour with Joachim Low and was dropped to the bench in the knockout stages. Having not been invited to the 7-1 party that Germany had with Brazil, Gotze’s winner against Argentina will be just as important to himself as to his country, as he was one of the players that needed a World Cup moment and few will have one as important as his.

When Gotze arrives in Germany, he will be a national hero. His goal will be etched into his country’s proud football history, and will layout a new chapter in German football. He, like most of his teammates, still have one or two World Cups ahead and his winner could just foreshadow the international empire the Germans are about to build, and be a glimpse into the football’s new superpower.