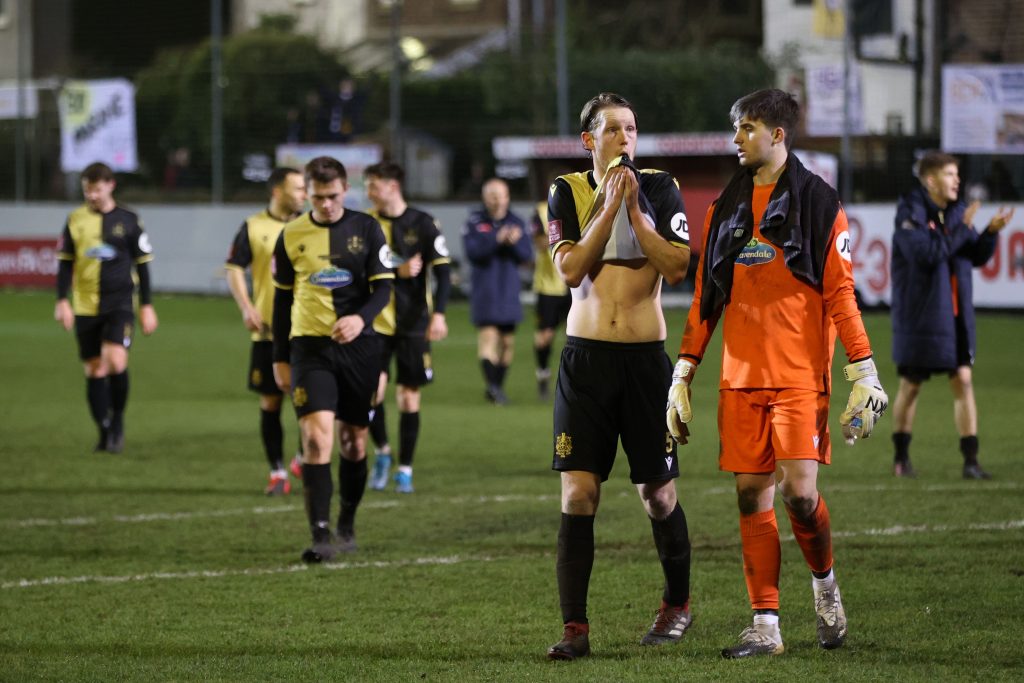 January 10, 2021, Rosset Park Stadium, College Road, Crosby. The biggest day in the 127-year history of Marine AFC. To understand why this day mattered so much, let’s take a dive into the past:

In 1894, Marine AFC was founded by a group of local businessmen and college students. The name came from the Marine Hotel on the River Mersey sea front at Waterloo which was the founders’ meeting place, seven miles north of the Liverpool city centre. Nine years after their inception, they moved to their current stadium.

They were never a seriously professional club at any point in their history, but they did win some trophies (which might perhaps be the only category where they can claim to be better than Spurs). Marine AFC’s honours include the I Zingari League (an amateur competition operational around the time of their formation), the Liverpool Amateur Cup, the Lancashire Amateur Cup, the Liverpool Senior Cup, the Northern Premier League and many others.

In 1972, the Mariners appointed Roly Howard as their first team manager. The man who also happened to be Sir Kenny Dalglish’s window-cleaner went on to manage the club until he retired in 2005, overseeing 1,975 matches of competitive football – a Guinness World Record.

As far as the FA Cup is concerned, they did have one historical third round appearance – in 1992/93 when Crewe Alexandra beat them 3-1.

Marine AFC faced Barnoldswick Town in the FA Cup Preliminary round. After a tense start, Marine keeper Bayleigh Passant was controversially sent off for a last-ditch challenge, and their opponents converted the spot-kick.

The fairytale could well have been over before it began as Marine were a goal and a man down, but they rallied in the second half. Even then, they could only trouble the scoreline in the 87th minute through fresh-signing Ryan Wignall’s volley.

Penalties seemed inevitable, though, until Marine had a free-kick in the last minute of stoppage-time. Another new addition to their squad, Josh Hmami stepped up, but his strike hit the underside of the crossbar. With no technological aid, nobody could have been 100% sure as to whether the ball had crossed the line, but the linesman thought so, and that was all that mattered.

Next up, Frickley Athletic in the FA Cup’s First Qualifying round. David Raven’s first goal for the club in the 72nd minute was enough to send the Mariners through. Runcorn Linnets were their opposition in the Second Qualifying Round, and this match was even tenser.

Marine were the better side in the first half, and some torrential downpour helped them score early on in the second half. Again, there was late drama, though. A stoppage-time spot-kick sent the match to penalties, where the visitors advanced with a score of 3-4.

The Third Qualifying round was arguably the easiest for the Mariners, as they thrashed Nantwich Town 4-1 thanks to braces from Josh Hmami and Anthony Miley. The final Qualifying round saw manager Neil Young visit his former side, Chester FC. Marine won by the only goal of the match scored in the 81st minute as a spot-kick proved to be the difference between the two sides.

Now, Marine AFC were in the real thing.

The first upset that the Mariners caused saw League Two side Colchester United exit the FA Cup. Anthony Miley rebounded a saved free-kick into the net in the 25th minute to give the eighth-tier side the lead, but Colchester did equalise after the hour-mark. Bayleigh Passant’s heroics sent the match to penalties, where his side progressed 5-3.

Then came Havant & Waterlooville, who, being a sixth-tier side, were considered relatively easy opponents, but they were undoubtedly the favourites. Marine battled hard, but there were no goals or notable events in normal time except a red card to a Havant player in the 88th minute, which gave his opponents a big advantage in extra time. Yet, the Mariners were not able to score until the very last minute, when Niall Cummins bundled the ball home following a set-piece.

Marine AFC advanced to the third round, but they were to face Tottenham Hotspur, who were over 160 places up the Football Pyramid as the two sides were set to clash.

Rosset Park Stadium, well, not really a stadium. A place with a measly seating capacity of 389, but a place called home for Marine AFC. Now, José Mourinho – the José Mourinho – was coming with Tottenham Hotspur to this little football pitch.

Serious preparations were in order, but that costs money, something the club didn’t have too much of. So, they intended to make do wit the matchday revenue they were set to earn, but all of their plans went out of the window when Merseyside was placed in Tier 3 lockdown as the mutated strain of the Coronavirus was spreading. The fact that the game was to be played behind closed doors meant that Marine lost a potential £300,000.

This is where everyone came together to support the minnows, as Spurs fans bought tons merchandise, over 30,000 virtual tickets with a chance to manage the club for a pre-season friendly were sold, Liverpool and Everton helped by lending their training grounds, and the likes of The Athletic and Jamie Carragher’s foundation, JC23 stepped in to replace the lost sponsors.

Then, the great day came.

As journalists entered the ground premises to report on pre-match proceedings, their main concerns were the stray balls that were attacking them from the warm-up. There was nothing to protect them on the small stands, but there was a net barrier along the length of the pitch. It was protecting houses.

Happy Birthday Deb, a sign read, pointing to a woman sitting in her backyard with a glass of wine in her hand, looking forward to watching Tottenham Hotspur play an arm’s length away from her house.

A board reading #46 was on the net elsewhere – it indicated the house number you would have to visit if the ball crossed the barrier. There, a man emerged from the first-floor window, getting an aerial view of the ground. In time, the ball was kicked into the backyard of #11, and even though no windows were damaged, it could not be retrieved – it would have to be disinfected first.

The scenes were unreal.

Enjoying a glass of prosecco watching your team play Tottenham from your own back garden.

#MARTOT The magic of the FA Cup Jose n co with a bloke texting sat on his shed n a lady with a nice glass of wine!! pic.twitter.com/ZTFp1pWzDy

The names of the soldiers came out an hour before the battle was set to commence. An army of nobodies from a near-insignificant club was up against potential Premier League title-challengers. Dele Alli was up against a binman (ironic), Sergio Reguilón came up against an NHS health worker (even more ironic), Gareth Bale met a man who could well have helped assemble his very car, and José Mourinho engaged a Merseyrail manager in a battle of wits.

The goal for Marine AFC was to quite simply avoid a humiliation. Victory was quite simply unfathomable. A respectable fight was all that the Mariners would have wanted to put up.

Six minutes in, Alli had a hit from outside the box, but to the relief of the fans in their backyards, Bayleigh Passant, a man who was pictured buying a couple of crates of beer in his kit after his side’s second round FA Cup success, held on to the ball.

Air horns were abuzz in the 19th minute when Neil Kengni let fly from range. His dipping effort was left by Joe Hart, but it hit the crossbar, and luckily for the keeper, bounced out. So close.

Carlos Vinícius after scoring against eighth-tier outfit Marine in the FA Cup: pic.twitter.com/GjZEeTQMUL

Luckily, though, that didn’t have an impact on the Marine AFC social media manager’s sense of humour.

Just before the half-hour mark, Spurs doubled their lead after Vinícius turned the ball into an open net following Passant’s splendid close-range save off Matt Doherty’s shot. A couple of minutes later, the dream properly started to fade away, as Lucas Moura converted a free-kick to make it 3-0. Vinícius then went on to complete his hat-trick before half-time, so it was 4-0 at the break.

Marine battled hard in the second half, but they did concede to 16-year-old Alfie Devine who became the youngest-ever player and scorer in Spurs’ history, and perhaps the visitor who will remember this day most fondly.

Alfie Devine was born two months after the "I think I'm a special one" press conference.

Although the defeat was sour and of a great margin, the memories this match will live on forever in the history books of Marine AFC. An eighth-division side went toe-to-toe against a world-class outfit, meeting professional footballers who they would expect to see on TV face-to-face.

The tale of Marine AFC, the Wizards – Magic-wielders – of the FA Cup will continue to be told for centuries, passed on generation-to-generation by those who lived it on and around the pitch, and those who witnessed it from afar.