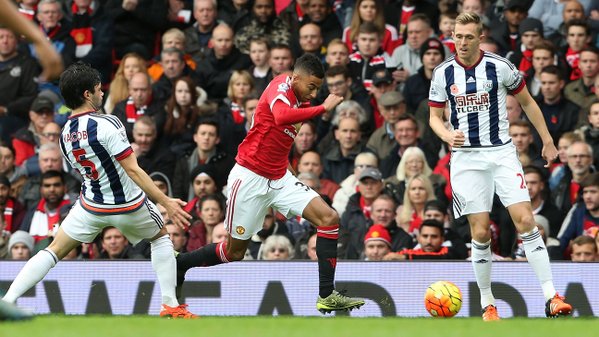 Jesse Lingard and Juan Mata scored for Manchester United to give the Red Devils a 2-0 victory over West Brom at Old Trafford on Saturday in the Premier League.

Daley Blind started in defence along side Chris Smalling. Ashley Yound started as right back while Schweinsteiger continued in the midfield, as Morgan Schneiderlin was only fit enough to make the bench.

Tony Pulis started with Sessegnon instead of Berahino. Fletcher and Evans returned to their old club, while Rondon started as a lone striker upfront.

After a cagey 15 minutes, the first real chance of the match fell to the home side. Schweinsteiger picked Rooney with a superb through ball, the United skipper intelligently pokes it in the path of Mata, who tried to curl the ball on the far post. The Spaniard’s effort beats the out-stretched arms of the goalkeeper Myhill but went agonisingly wide off target.

United earned their first corner of the match in the 28th minute. Mata drifting from the right floats in a lovely dipping cross for the onrushing Lingard, but Dawson anticipated it brilliantly to clear the ball out for a corner.

A sloppy pass nearly gave United the lead, as the ball broke for Lingard. The young forward shoots at goal but the former United defender Jonny Evans slides in to make a last-ditch block.

United have the defence to win the League but really lack any sort of firepower going froward. Martial can’t do it all on his own – at 19.

United created late pressure with Anthony Martial nearly got his name on the scoresheet. The French striker looked lively throughout the first half and tried to engineer something every time with his dazzling skills. He turned and shoots in the area, but Myhill denied with a great save.

A little unfair to criticise MUFC for not ‘attacking’ enough this match. Martial clearly allowed the freedom to go forward. WB very negative

Four shots on target for Manchester United in their last four first halves at Old Trafford in the league.

United broke the deadlock in the 53rd minute through young Jesse Lingard. A headed clearance off Martial’s cross dropped for Lingard who curled a composed finish into the far corner from 20 yards out for his first United goal.

Great finish from Lingard. Halfvolleyish / inside of the foot. Not as easy as me makes it look like @ManUtd 1-0

Stunning finish from Lingard. Long time coming from a player whose spent so long waiting for his chance at Man Utd https://t.co/yKTDVEcc2A

That’s a beautiful curling finish from Jesse Lingard. Good on him, and thank goodness United have scored. Please keep attacking and get more

The goal took the pressure off United and thereafter the home side started playing some brilliant attacking football. West Brom hardly tested De Gea, and created half chances though set pieces mainly.

Berahino, after coming on as a sub, missed a golden opportunity to equalise for West Brom. Dawson provided an excellent cross from the right but Berahino heads it over from close range.

76′ – A special moment for Cameron Borthwick-Jackson as he makes his #mufc debut, coming on for @MarcosRojo5.

Martial is a lovely player to watch. He makes you forget that he’s only 19. After the ball being deflected off a West Brom defender and scooped in the path of Martial, the Frenchman lays off for Mata, who blazed it over the bar.

Moments later, Martial earned a penalty for his side. McAuley could only bring down Martial in the box, after he was set free with a sublime through pass from Mata, resulting in a penalty. Juan Mata stepped up and cooly slotted home from the spot.

30 – Since debuting for Manchester United, Juan Mata has been involved in more PL goals than any other player at the club (30). Critical.

“After half-time the game opened up and we got more into it but the first goal is poor from us. It’s a great finish. After that I thought we got into the game and the chance (for Saido Berahino) – if there’s a guy you want it to drop then it’s Saido. He seems to duck his head but he should just let it hit him on the forehead. If it has to come off your nose it has to come off your nose.

“I thought today in the last 20 mins he could play a part. Unfortunately he missed the chance we needed. I’m disappointed for the players – most my sides don’t lack effort and commitment – we’ve just switched off and been punished. Gareth McAuley (for the red card and penalty) should have stayed on his feet and if the kid scores the kid scores.”

“How Jesse finished was remarkable. In a training session this week he had two chances like this and he shoots at once and I told him he needs to take a touch before the shot, which he did today

“I give every player a chance – always. When you are in my squad I will give you a chance. He grabbed it with both hands.”