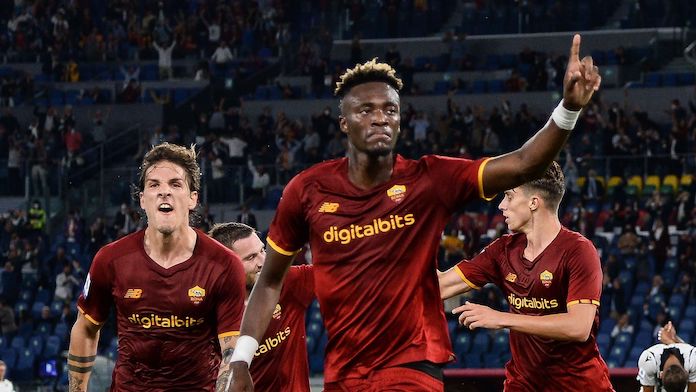 Manchester United are looking to improve their attacking department when the summer transfer window re-opens and they have identified the former Chelsea striker Tammy Abraham as a potential target.

According to a report from Corriere Dello Sport, the Red Devils are keen on bringing the 24-year-old England international back to the Premier League.

However, the report adds that Roma are calm about the situation and they are prepared to turn down any advances for the England international in the coming months.

The 24-year-old has been an exceptional signing for Jose Mourinho’s side and he has scored 23 goals and picked up four assists across all competitions for the Italian side.

Abraham has signed a long term contract with Roma and it is no surprise that the Italian giants do not want to part with him just yet.

Manchester United will have to bring in a recognised goalscorer to replace Edinson Cavani in the summer and Abraham would have been a quality long term acquisition for them.

Despite the fact that the 24-year-old struggled to hold down a regular starting berth at Chelsea, he has done well in English football when given the chance. It is fair to assume that he could have settled in quickly and made an immediate impact at Old Trafford.

Abraham has managed to hit the ground running at his new club and he is adored by the Roma faithful. The youngster needs to stay at a club where he will get regular first-team action and staying at Roma would benefit his development for now.

The chance to return to the Premier League and prove his quality could be a tempting proposition for the young striker but it seems that a move away from the Italian capital might not be realistic this summer.

The report further states that Chelsea have an option to re-sign the player in the summer of 2023 for a fee of around €80 million.

It will be interesting to see if Manchester United are prepared to wait until the end of next season to make their move for the England international.

Abraham would be an upgrade on the likes of Marcus Rashford and Anthony Martial as well.

Both players have been quite underwhelming for the Red Devils this season and the Premier League giants have had to rely on Cristiano Ronaldo to provide the cutting edge in front of the goal.