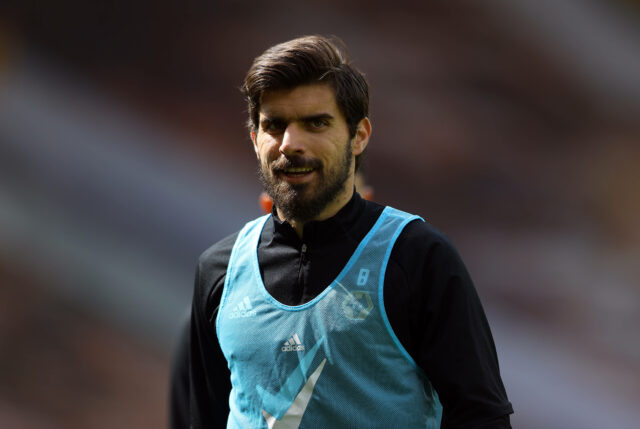 Manchester United are looking to improve their midfield options during the January transfer window and they have identified the Portuguese international midfielder, Ruben Neves, as a potential target.

According to a report from the Sun, the Red Devils are determined to sign the 24-year-old central midfielder after his splendid performance at Old Trafford recently.
Wolverhampton Wanderers managed to beat Manchester United at Old Trafford just a few days ago and Neves was outstanding for the visitors.
The Portuguese midfielder has impressed against Manchester United in the past as well and it seems that his performance has caught the attention of manager Ralf Rangnick.
The 24-year-old midfielder has two years left on his current deal with the Molineux outfit but he is thought to be keen on playing Champions League football.
A move to Manchester United could help him realise his ambitions and it remains to be seen whether the Red Devils can agree on a fee with Wolves over the next few days.
The report adds that Manchester United could submit a bid of around £35 million for the midfielder but wolves will only listen to offers in excess of £40 million.
If the Premier League giants manage to secure the Portuguese midfielder’s services for a fee of around £40 million, it could look like a bargain in future.
The 24-year-old has the potential to develop into a top-class midfielder and he would certainly be an upgrade on the likes of Scott McTominay, Nemanja Matic and Fred.
Rangnick needs a player who can control the tempo of the game from the base of the midfield and Neves would be an ideal addition for his side. The 24-year-old is an outstanding passer and he works hard defensively. Furthermore, the Wolves star is exceptional from the long range with his shooting and he can chip in with vital goals from time to time.
His arrival will also allow the likes of Bruno Fernandes and Paul Pogba to operate with more freedom.
Settling in at Old Trafford should not be a problem for Neves either. The 24-year-old has played in the Premier League for a while now and he will be able to reunite with his compatriots Fernandes and Cristiano Ronaldo if he joins Manchester United.
The Wolves midfielder needs to join a top club in order to continue his development and fulfil his potential.  A move to Old Trafford would be ideal for both the player and the Red Devils.
Join our Telegram channel to stay up to date on the latest in marketing